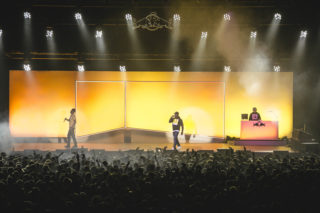 The Bow boy played his debut album in full in front of 7,000 people at the Copper Box at London's Queen Elizabeth Olympic Park.

Thirteen years on, with no significant anniversary, it does feel like a slightly pegless occasion for Dizzee Rascal to revisit ‘Boy In Da Corner.’ Except, perhaps, to remind people that in a year where Skepta won the Mercury Prize and the BBC News at 10 are doing pieces about grime, that Dizzee was one of the first people through the door. Back then, of course, as the roots of the scene began to grow, it wasn’t even really called grime.

Back in May, Red Bull coaxed Dizzee into performing the album in full in New York for the first time. An online petition called for a similar event to happen in London.

Of course, it’s not just Dizzee’s local neighbourhood that’s changed in more than a decade – canal-side bars have popped up selling craft beer and old warehouses are occupied by design agencies – but Dizzee Rascal himself.

Now 32, he moved out of east London a long time ago, via Kent and now spends most of his time in Los Angeles and Miami. Given that he’s promising any forthcoming material will be the “hard shit”, his most recent single ‘Hype’ was not that, and still saw him collaborate with Calvin Harris, like he did on stratospheric hits ‘Dance Wiv Me’ and ‘Holiday’.

It’s smartly done, tonight. The Copper Box, built for the Olympics where it acted as the handball arena, is now used for a variety of sporting events, but hasn’t seen anything like this. It feels like a large school gym, but the sound is crisp and enveloping. Fans get selfies in photo-booths designed like ‘Boy…”s album cover dotted about the venue. The atmosphere has a feeling of a celebration about it – the likes of Lily Allen, Skepta and FKA Twigs watching on. 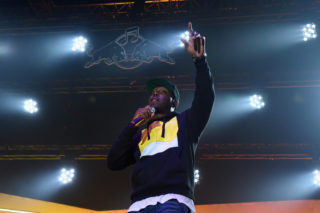 The stage, too, is mocked up like an illuminated version of the ‘Boy In Da Corner’ cover artwork. After a series of audio-clips of famous fans talking about the influence of the album, Dizzee begins the set by sitting in front of it, assuming that iconic pose and rolling into the first bars of the reflective ‘Sitting Here’.

‘Stop Dat’ serves up the first mosh pits of the night. ‘I Luv U’ sends the crowd into jumping swirls – drinks flying through the air. Dizzee, his flow still impeccable, swaps flanks of the stage and whips up the crowd.

But like most shows where an album is performed front-to-back there are few surprises and a couple of lulls. ‘Boy In Da Corner’ is an important album, but it’s not a perfect one. One fan’s rare moment is another one’s toilet break. That’s how it is. ‘Jus’ a Rascal’ sounds enormous, as does ‘Fix Up, Look Sharp’, of course, while tracks like ‘Round We Go (Ain’t No Love)’, in this pumped up setting, are rather more forgettable.

Whether tonight is a symbolic hint that Dizzee’s back to reclaim some turf, to remind people of his influence, or simply just a bit of fun, it’s unsure. After all, a lot has changed. 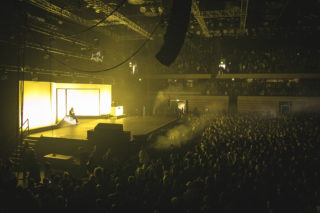