Wrap your eyes around this lot

Words by Loud And Quiet Photos by Jody Evans

About six weeks ago End of the Road festival revealed the first wave of performers at this September’s festival. The line-up poster wasn’t so much as dotted with exciting prospects as totally drenched in them, including headliners Pixies, Big Thief, King Krule and Angel Olsen. They’ve got more up their sleeve though. Today (5 March) they’ve confirmed another set of eye-catching confirmations. Like Gwenno and Georgia Ellery (Jockstrap, Black Country, New Road) playing the soundtrack to the film Bait. Makaya McCraven, Sorry, Keeley Forsyth, John and caroline are all enticing prospects, too. Here’s a list of the acts just added:

It all takes place at the picturesque Larmer Tree Gardens, Dorset between 3-6 September. Tickets are available now.

Check out Loud And Quiet’s coverage from last year or hear festival founder Simon Taffe in conversation on our Music Made Me Do It podcast sharing how he started EOTR from nothing. 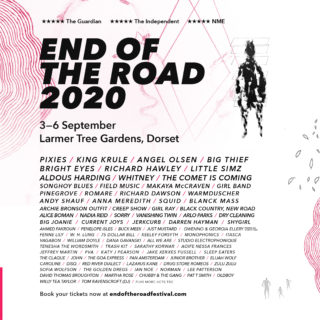