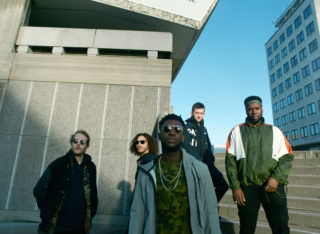 Words by Loud And Quiet Photos by Gabriel Green

Jazz is impossible, right? I mean, do you jazz? And if you do, could you be jazzing more? There are a lot of people who think that you could be. Or at least that’s the perception of jazz from the outside – it takes itself seriously, and even if you think you’re into it, there’s probably someone close by only too happy to tell you that you’re fucking clueless. Ezra Collective are a far more welcoming type of jazz group, who wear clothes that you do and listen to grime, hip-hop and dance music as well as Charlie Parker. They’re on the cover of this month’s magazine, in stores this weekend (March 9th). 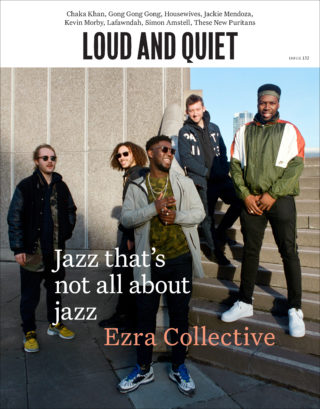 The rest of L&Q 132 largely leans on discovering experimental new music, from Beijing’s drummerless drone duo Gong Gong Gong to Latin alt. pop musician Jackie Mendoza, who weirds-up a ukulele on her debut EP. Housewives were so dedicated to getting out of their comfort zone that they sold their guitars and moved onto houseboats so they had to essentially write their new record in Wetherspoons, where they could get charge on their laptops. And Lafawndah, who you may well know already, … well… her global outlook on making music makes her almost impossible to categorise. Even These New Puritans have stayed true to a career of keeping us guessing with their new, fourth album, ‘Inside The Rose’.

We’ve also got an feisty (y’know, kind of aggressive) interview with Chaka Khan; Kevin Morby showed us around his home in Kansas City; and there’s a long conversation with Simon Amstell about his directorial feature film debut, Benjamin.

Plus 16 pages of reviews of this month’s most interesting album, shows, books and films. And more.

Subscribe from just £3 per month and this’ll be your first of 9 issues. Or simply order a single copy here.

OR, pick it up from your local decent emporium from this weekend.