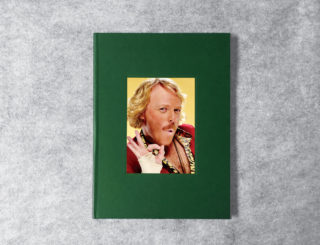 Don't be a dingbat – there's mileage in this yet

The agent of Leigh Francis was laughing hard. Classic Keith, she thought – boy does this guy keep me on my toes. Leigh stared back at her, straight-faced. Judith howled all the more. She’d just noticed that for the first time in 15 years Keith wasn’t wearing an animal print shirt beneath a blazer. His right hand wasn’t bandaged up. He’d even shaved off his ginger moustache. Brilliant!

Judith slowly spluttered to a halt as it dawned on her that this might not be joke after all. “Wait… Keith, are you shitting me right now?”

“No,” said Leigh. “I’m done. I’m sick of everyone thinking I’m actually Keith Lemon. It’s driving me insane. You know what happened the other day? My house phone rang and I answered ‘Leigh speaking’, and the person on the other end said, ‘Sorry, I must have dialed the wrong number,’ and hung up. It was my fucking Mum, Judith!”

Judith suppressed a snigger. She knew this was pretty serious.

“I’d hardly say that,” Judith protested. “That game you played a couple of weeks ago – I’ve never seen that done on TV before. The one where Emma Bunton had to guess the old golfer’s ages from only their bare arses.”

“It was called ‘Hole In Bum’, Judith, and you’re kind of proving my point.”

Judith tried in vain to convince Leigh otherwise, but he was adamant – he’d record the next episode of Celebrity Juice as himself. Keith Lemon was dead. The guy was a twat.

“I think it’s really brave what you’re doing. We all support it.” Holly Willoughby really is as nice as everyone says she is, and Leigh appreciated her words of encouragement.

“Yeah… I guess,” said Fearne Cotton, who was later heard saying to a makeup artist that Leigh’s sudden change of heart was “pathetic” and would “land us all in the shitter.”

On his way to the set, Leigh passed the same familiar faces he always did – the runners, the camera operators, catering and someone called ‘the grip’, whatever that meant. They all seemed to smile at him like his wife had just died. “Have a good show Kei… Leigh,” said one junior assistant who was instantly dismissed.

He turned left into the green room, sensing the nerves of everyone involved. Best to reassure everyone that things were going to be ok, he thought.

The two most professional guests, Holmes and Caroline Flack, put a brave face on it and tried to lift the room with talk of how it was the start of a new era. Rylan from Big Brother’s Bit On The Side made a catty comment about Leigh being less fabulous than Keith, but you could tell he was onside. Everyone thought it best not to mention it to Joey Essex at all, who told Leigh, “you look kind of familiar, innit, like a geezer I’ve been on a panel show with.” As was the case every week, Will Mellor was told that he wouldn’t be needed for this episode but thank you once again for volunteering to come down in case. Fearne Cotton muttered something about Rufus Hound getting into the “idiot’s” head.

As the show began to film with the warm up comic announcing, “Please welcome your host, Leigh Francis,” hardly anyone in the fevered audience noticed the name change. A man in a ‘Bang Tidy’ T-shirt cheered furiously.

This was it. Free at last, Leigh calmly walked out to finally be on TV as himself.

The first, new, straighter buzzer round eventually crawled to an end, having only had a smattering of laughs at Joey Essex’s expense.

“And the scores are…” said Leigh.

“You’re supposed to say ‘Shit-ting’,” shouted a bloke four rows a back.

“What?! Why?” shouted another.

“You look more of a lemon now, bruv,” yelled a third voice to the recording’s biggest laugh yet.

Leigh exhaled and looked at the buttons on his plain blue shirt. Then he looked at the kind face of Holly and the orange face of Rylan. He took a minute and then a deep breath. “Only kiddin’, you Ding Bats,” he yelled in a trademark Keith Lemon lisp. “Eamonn, have you smashed anyone’s back doors in recently?”