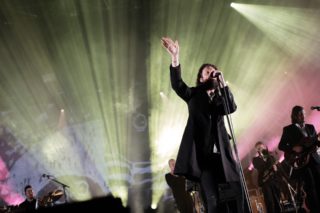 When End of The Road booked Father John Misty as their big-draw headliner they wouldn’t have know that his 2017, third album was to be a long, slow diatribe against modern living and what he sees as society’s lost way. ‘Pure Comedy’ is a smart record (if condescending, to some), but it’s not the kind of thing you want to end a day of drinking in a field to. Josh Tillman’s hardly played it in the UK, but the general feeling is that he won’t curtail the misery and yield to a festival crowd – he doesn’t seem like that kind of guy.

Maybe he wasn’t, but there’s something markedly different about Tillman’s performance tonight, compared to wiggling preacher going wild for ‘I Love You, Honeybear’. Matured, even – God forbid. 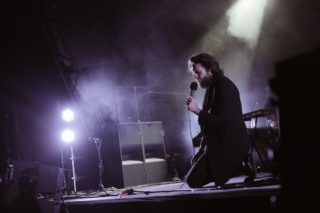 Father John weights his set perfectly, with the most digestible tracks from ‘Pure Comedy’ to open (the title track, ‘Total Entertainment Forever’, ‘Things It Would Be Helpful To Know Before The Revolution’, ‘Ballad of a Dying Man’) followed mostly by songs from ‘Honeybear’ and a handful from debut album ‘Fear Fun’ (‘Hollywood Forever Cemetery Sings’ being the high point from that record). It’s not the stubborn selection that Tillman’s past, knowingly difficult persona predicted, but, more than that, Tillman has curbed the histrionics by just the right amount. He still drops to his knees and springs back up, because he’s very good at that, but it’s a party trick he’s reigned in so that it looks impressive when it happens. The same goes for his back bends and stamping of the mic stand. He’s not static, but he’s made it harder for people to insist that his performance is over the top and phoney.

On the droll inter-song chatter, he’s tempered that too, choosing his moments to poke End of The Road’s wooly reputation (“I’m doing a lecture of alpaca shaving later on… followed by a wine tasting”) and he’s sincerely modest as he explains that playing festivals aren’t his forte. On a couple of occasions he laughs at himself mid-song – something you can’t imagine the ego-mad FJM doing a year ago. 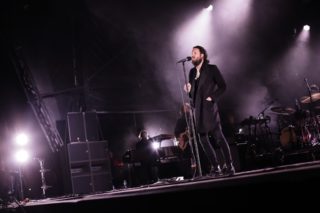 When he plays standalone single ‘Real Love Baby’ it’s a surprise because we’ve all forgotten that he could be so breezy in the light of ‘Pure Comedy’, but it feels like in writing an album so comically misanthropic Josh Tillman has ended up at a place where he’s at his most happiest and authentic.

Reasons to hate Father John Misty would reach critical mass during his wildest shows, which were fun but could feel over-long the wackier and more manic he got. You can tell how less contrived he is these days from his dancing silhouette during ‘True Affection’ alone.