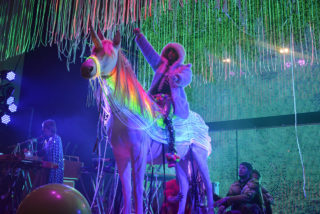 A bleak, grey winter sky looms over Manchester’s Academy, which tonight plays host to The Flaming Lips’ second of only two UK shows on their tour. Eager fans huddle together in the queue, a thin, droopy rollie their only source of warmth as rain drizzles down. Inside the venue it’s like stumbling upon a different reality, because, hey, this is The Flaming Lips. But what is that reality in 2017, now that ‘Oczy Mlody’ exists – the band’s 17th album; an uncharacteristically ambient record from this troupe of confetti-lovers and carnival float hippies. How does that affect the Flaming Lips party? The simple answer is that is doesn’t.

A 12ft inflatable mushroom greets us from the cold, and a giant disco ball hangs in front of vocalist Wayne Coyne as his burst onstage with the psychedelic theatrics of ‘The Soft Bulletin’. Countless multi-coloured balloons bounce around the audience and a dazzling light show erupts. That’s song one, and no doubt sounds familiar, as is Coyne’s giant hamster ball, confetti canyon, inflatable friends and – perhaps a new addition – a unicorn covered in wedding disco snake lights. 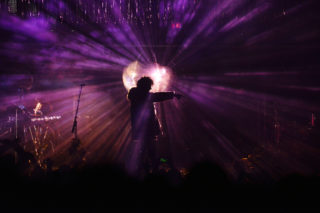 The band’s set is dominated by older favourites like ‘Yoshimi Battles The Pink Robots Pt. 1’, during which some technical difficulties cause them to cut out briefly during the first verse, but an ecstatic audience yell the words back with dedication before the band swoops back in for a triumphant chorus.

Elsewhere, cuts from ‘Oczy Mlody’ are spliced into their set, and the glistening electronics and moody ambience of tracks such as ‘How??’ (performed from the unicorn) and ‘There Should Be Unicorns’ in fact settle in comfortably as respites amongst ‘The W.A.N.D.’, ‘Are You A Hypnotist??’ and a stunning rendition of ‘Space Oddity’ for a timely tribute to the late David Bowie, who Coyne after reveals has been a constant source of inspiration to their own genre-melding music. No real surprise there, but the gesture seems genuine and heartfelt. 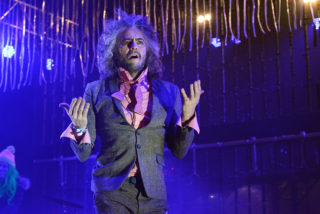 In another brief pause between songs, Coyne admits to the audience that he’s been feeling disconcerted as of late. “There are things out of our control,” he ponders, and it’s not hard to imagine what he’s referring to, just two days after the inauguration of a president who poses nothing but threats towards creatives and minorities. Moments later a giant rainbow inflates above him at the front of the stage, and a feeling of positivity quickly drowns any discontent before the band close with (of course) ‘Do You Realise?’.

It’s business as usual for The Flaming Lips, at this weird, frightening time. Fans slowly exit the venue and wander back out into the rain. Can’t we all stay a little longer? 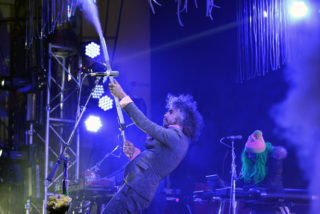 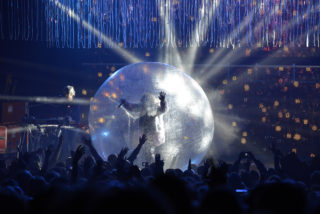 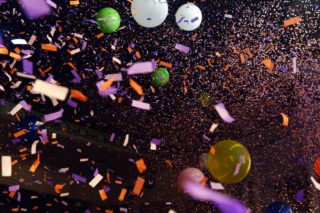