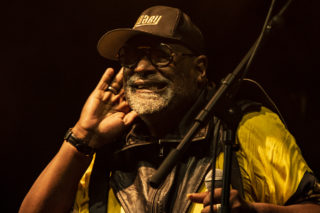 A memorable send off from the P-Funk legend

The mothership is up and left, flying stateside after tonight, never to return.  Whatever virus it cooked up and sprayed on music’s cereal crops, creating a universe of sampled sound, must be taken back to its own particular microclimate in California, where it can stabilise among the bison bones and rotting San Pedro cacti.

Legendary in the ’70s, of course, it’s spent two decades docked in courtrooms, fighting drab legal battles for unpaid royalties (he might be the most sampled artist of all time). Bits have fallen off and it requires an extended crew to fly (there must be thirty people on stage), lacking the kind of Disney money that rejuvenated the Millennium Falcon. In fact P-Funk, the genre George Clinton created by adding James Brown to psychotropics in a mind locked on Atom age references, was always too weird for TV and film – it’s perfectly suited to the sprawl of the Internet. Check out the man’s website hawking new single ‘I’m Gonna Make You Sick’, which promises ‘Post Nasal Tripping,’ ‘Shortness of Depth’ and ‘Defiant Reasoning’. It sounded better in the Roundhouse, where they seem to have fixed the problem of centrifugal sound-worsening.

Tonight, here at his final UK show, George Clinton and his band jumps from the get-go; a huge tight, irresistible groove. The crowd are won over instantly and they ‘hey-ho’ one-arm wave goodbye as instructed. The hits of thirty-plus years are present and correct but it’s given to us in a medley, eventually coming to a third-way stop after ‘Flashlight’.  Then most of the band go off stage to let the young blood do some smooth turn-of-the-century R&B and Soundcloud rap, returning for the excellent early ’70s smoke-out ‘Maggot Brain’. Sure, it’s probably more spectacular now – slicker, to an extent – compared to the ragged acid rock group this writer witnessed in 2008. But maybe no better for it. This iteration is a touch circus-like and a bit depressing.

Ahead of the curve in so many other ways, George Clinton also presaged an age of artist-as-curator. He doesn’t ‘do’ anything but he occupies a central position that gathers and redirects flows of talent circulating around him. He is the name on the bill, and he has finally obtained financial security and sobriety with which to appreciate his lofty place in music history. But, like the illegible tangle of contracts – unsigned, forged, lost – spilling out infinitely beyond concepts of ownership and authorship, and the equally ethereal streams of music containing chunks of his music, the prior and endless sense of reverent congratulations and retrospective gets the ‘original spark’ or ‘creative impulse’ lost in meta-discussion. Clinton says the band will continue touring now after he retires – he’s continuing until May 2019 – but I’m not sure anyone knows what happens to an organism that’s born exploded once it gets decapitated. 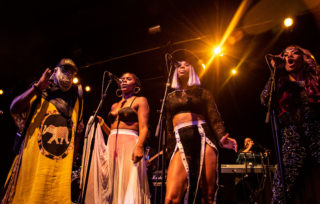