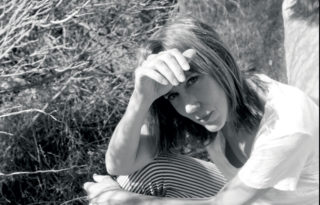 "The worst date I've been on? That time he turned up with his girlfriend."

This month Beth Orton returns with her seventh album, ‘Kidsticks’, made once again with a progressive electronic mind of the day – Andrew Hung of Fuck Buttons. The Norwich-born artist filled in our Getting To Know You questionnaire.

Working to become a parody of my former self. Being abandoned and rejected for trying to be someone I thought those I looked up to wanted me to be. Forgetting that all I ever wanted was to make something resembling art. On and on an endless cycle of self-loathing. Until… I forgave myself and remembered how it was working as a waitress.

New York. Because I was there just last week and Spring broke in two all over my face and the faces of those around me and poured into our very beings and let us into one of the best feelings ever.

The one I hear someone else singing that I know I could have written better if only I’d seen it sitting right under my nose.

The Queen, at Buckingham Palace. I was in a little huddle with Jeanette Lee (Rough Trade), Mick Jones and Jarvis Cocker. We were eating peanuts and dry curly-edged cheese and ham sandwiches, drinking warm champagne and giggling when the Queen rocked up to us, her aides bustling nervously around her because she’d gone off-piste. We all found her very jolly and thought she was incredibly genuine all things considered. She seemed truly interested in us all and curious to know what it was like to write a song, like she’d never met musicians before, when of course she’s met billions. She asked me if my mind was forever whirring and pointed her finger at her head and did little circles with it. Maybe she just thought I was off my rocker. I thought she was really like someone you could like and it was one of the most brilliantly unusual nights out all round.

That time he turned up with his girlfriend.

Reading the press of people I’m really fucking jealous of.

My first guitar – a Gibson Hummingbird.

I’m actually quite a good Mother as it goes….

A proper pair of jeans that actually fit.

Getting home and finding out the jeans don’t actually fit.

Anything by Graham Green.

It’s none of my business.

Acceptance of what is.

I want to fall asleep in the arms of my dearest.

Being with someone so as not to be alone.

You don’t have to have sex with him if you don’t want to.

Be kind to yourself and the rest will follow.