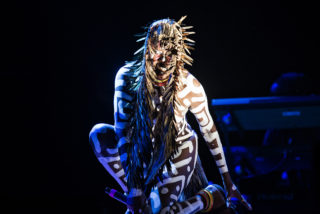 Accordingly, when Jones arrives tonight a full 12 minutes into her allotted slot (positively Axl Rose by Primavera’s tight-ship standards) hidden behind a black drape being held up by two stagehands, it becomes the most audacious – and impressive – entrance of any act all weekend. Her band launch into her dancehall reworking of Iggy Pop’s ‘Nightclubbing’, and there then follows 63 minutes of euphorically bombastic disco and heavy dub alongside costume changes and confetti cannons, combining to a form the kind of spectacle that projects right to the back of the vast concrete expanse that comprises the festival’s main-stage area. 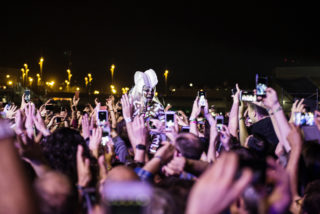 What is perhaps most winning about Jones’s performance, though, is that despite the high production values – there’s eight different outfits, a thong-wearing male acrobat cavorting around a stripper pole and a section where Jones becomes a one-woman glitter ball when a multicoloured laser is shone directly onto her sequinned bowler hat – none of it feels inauthentic, or like it’s on rails. There is no backing track, no autotune, no choreography or scripted banter, just a crack band of musicians and a magnetic performer who remains, at 69, an explosion of pure charisma.

Indeed, when she introduces a new song mid-set by telling her audience that “you can’t buy it, you can’t stream it, you must listen to it – LIVE!”, there’s an unavoidable subtext here of Jones reminding us that never mind her acting or modelling or even her albums, she’s at her most persuasive as a singer and showwoman, performing in the (body-painted) flesh, doing as she pleases, stage-managed by no-one.

Combine that purity of performance vision with undeniable songs – not least the closing section of ‘Pull Up To The Bumper’ (during which Jones straddles a security guard’s shoulders and rides him into the crowd to meet her public) and ‘Slave To The Rhythm’ (performed immaculately while hula-hooping throughout) – and the result is substance to match the style, a masterclass in being festival fabulous and, if you listen closely, the sound of a rulebook being trampled triumphantly under a six-inch stiletto. 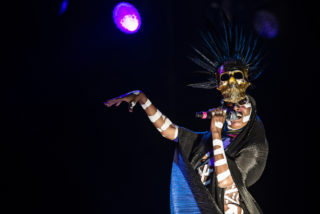