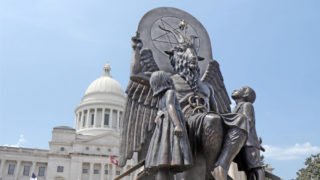 You might be more of a Satanist than you think you are. It’s one of the things that I took away from Hail Satan?, which documents the rise of The Satanic Temple across American and the world over the last half decade. In their first three years of existence they went from 3 members to 50,000 (now totalling 100,000), and it’s easy to see how and why in Penny Lane’s new doc.

At the heart of TST – as its members refer to it throughout the film – are values that we all believe in: acceptance, religious liberty, community and a safe space for the marginalised. These sound a lot like Christian values, although Christian America is of course outraged by the Temple, either unable or unwilling to see past the iconography and theatrics of a bunch of dudes wearing black. The problem, it seems, is that while TST don’t actually believe in the existence of Satan at all (only the otherness that he represents), the Church does. And then there’s the Temple’s big political quest: to campaign for government neutrality where religion is concerned. Far from being an unreasonable request, it’s categorically the American way: as TST politely point out, rather than being founded as a Christian country, God is not mentioned in the American Constitution, and the only mention of religion refers to the liberty of it, free from government bias. So TST take unkindly to Christian statues being erected on local government ground and – as is their right – campaign to erect their own goat-headed devil statue to sit alongside stone carvings of the Ten Commandments. Fair’s fair.

The Christian Church (a comfy cabal who’ve had everything their own way since ‘In God We Trust’ became a neat Cold War catchphrase in 1956) can neither see that they’re not the enemy in this situation, nor that these “devil worshipers” are by definition acting out of a patriotism that they would find admirable in the name of God. They are blind to the funny, nerdy side of the Temple too; to them enjoying the campness of the Devil enough to build their headquarters in Salam, and to their absurdist trolling of Fred Phelps, the hateful founder of the extremist, homophobic Westboro Baptist Church, by having same sex couples kiss over Phelps’s dead mother’s grave to “turn her gay”.

Still, Lane is careful to not frame TST founder Lucien Greaves and her other subjects as petty trouble makers. They are impassioned, disenfranchised citizens who found atheism too inactive. No wonder conservative America is so frightened of them – they’re everyday people who aren’t standing for it anymore. Hail Satan!