The verdict is in: James Bond is a cunt

We asked six willing musicians for their honest feedback on 2021, a year that some are calling “definitely the worst yet”. Here’s what they reckon.

What will be your lasting memory of 2021?

Stuart Braithwaite, from Mogwai: Finding out we had a number one record while putting my bins out.

Amy Taylor, from Amyl and the Sniffers: Any answer will be just as annoying as this question.

Arlo Parks: To me it was an absolute whirlwind – overwhelming, gorgeous, exhausting – a rollercoaster with me in the front gripping the seat for dear life.

Chubby Charles, from Chubby and the Gang: I lost a lot of very dear people. Talented friends. I’ll always remember this year for that. Threw myself into doing music. Evaluated my life a bit. Realised it don’t mean anything.

KAM-BU: Performing at Boardmasters in front of thousands of kids, and them enjoying every minute of it.

Self Esteem: I think ‘I Do This All The Time’ getting played twice in the same show by Steve Lamacq. It was so extra and also just felt very exciting. It was also very funny. I was also very drunk.

What did you do for your birthday this year?

Stuart: Went for a nice curry with my wife.

Amy: Went to Luna Park and got a hotdog.

Arlo: I slept in, went to brunch with my best friends in the morning, then ate cupcakes and did a Radio 1 takeover.

Chubby: Got steaming pissed. The Mutt’s Nuts came out like the day after so I think we were playing. Can’t remember.

KAM-BU: I actually stayed in. I don’t believe in birthdays.

Self Esteem: Y’know what, I went down that big slide in the Olympic Park. Hahahah. It was £15 for a Go Pro and the footage sent to you. As I was ascending the stairs my banking app chimed “Lindsey Mendick has sent you £15”, so yes there is footage and I shall release it when I’m hard up (mid 2022).

Amy: I think Seinfeld, it really did.

Chubby: People all of a sudden wanna be my pal now they know I can knock out a punk record. Funny fuckers.

KAM-BU: My friends and family.

Self Esteem: Erm, I binge watched a show called The Pact on iPlayer and every time we went to put another episode on I would say “Packed and ready?” And yeah, me and the person I was with fucking lost it for about 20 mins.

How carried away did you get with England getting to the Euros final?

Stuart: I’m Scottish. Are you serious?

Arlo: As someone with a terrible attention span and a crammed schedule, it flew right over my head.

KAM-BU: Mate, it was bloody well coming home! Instead only life came back, but we got the World Cup to come! Let’s gooo!

Self Esteem: It was weird wasn’t it? I was proud of the beautiful boys but I was so hyper aware that the rancid government would take credit for it I kind of didn’t want a win.

Who is your heartthrob of 2021, and why is it Jack Grealish?

Arlo: It is and always will be Tilda Swinton in a bright blue Balenciaga suit walking her Australian Shepherd in that Almodovar film La Voz Humana.

KAM-BU: Love his hair and spirit.

Self Esteem: Yeah, why would he get it so hard? The curtains? I can make all the progress I want, but I’ll still let a lithe man with curtains ruin my life.

How about the villain of the year?

Amy: Oh my god, Covid was. Melbourne was in lockdown all year – we had the longest lockdown in the world.

Arlo: It is and always will be the mum in Coraline.

Chubby: Any government type. Hate ’em all. Hate being told what to do. All that money and they can’t get a suit that fits between ’em. Clueless cunts.

KAM-BU: Myself. Because at times I’m my own worst enemy.

Self Esteem: Every single person that profited from a global pandemic.

Stuart: I loved Succession and What We Do In The Shadows – both amazing.

Amy Taylor: I didn’t really watch any telly shows, but I love 9 to 5 with Dolly Parton, Terminator 2, Total Recall and The Manchurian Candidate.

Chubby: I watch cartoons a lot. ’40s ones. I watched The Sopranos again. Oz. Handmaid’s Tale. I try not to watch TV. I hate technology. Rots your brain and I’m not sure how much brain I got left to spare.

Self Esteem: I finally did The Sopranos during the second wave and I’m not sure I would have survived without it.

Did you get out to see the new James Bond?

Stuart: I was brought up not to trust people who wear suits and also anyone who works for the British Government. Fuck James Bond.

Amy: It’s not out in Australia yet but I can’t wait to see it!

Arlo: Nope, I’ve been touring unfortunately, but I need to make time to.

Self Esteem: Fucking no way, I can’t think of anything more tired and boring than a man in a suit doing stuff.

Would you have gone into space with Jeff Bezos?

Stuart: Only if he had a one-way ticket.

Amy: Not with Jeff Bezos, no.

Arlo: I don’t think so! I’m perfectly fine down here thanks.

Chubby: Yeah and I would’ve opened the door when I got up there. You’re welcome.

Self Esteem: Y’know what, I did actually really get into the space race, the first one. I think I was quite mentally low and the idea that I could go TO THE MOON and on said moon nobody would be pissed off with me there was really stomach-settling. But nah, I don’t think I’d feel comfortable going anywhere with Jeffrey.

What song or artist gives you hope for a brighter 2022?

Arlo: ‘timetetheredtogether’ by Cryogeyser – washy, emotional music that makes me feel like I’m in a movie.

What positive will you take from 2021?

Stuart: That I’m grateful that people still want to listen to the band I play in.

Arlo: That we are stronger than we think we are and that dreams are within reach.

Chubby: I don’t believe in positives or negatives. That’s subjective and anything that’s positive may lead to a greater negative or vice versa.

KAM-BU: The other side of a battery.

Self Esteem: Everyone is as socially anxious as me, it turns out.

Stuart: We need to overthrow the UK government.

Amy: None that’s mine.

Arlo: Just that I’m excited for the year to come – to spend time in America supporting Clairo, to delve into new music and throw myself back into the world.

Self Esteem: I want to start a business that makes trousers for women with fat arses and small waists, and it’s called WIDE LOAD DENIM. I’m open to investors. 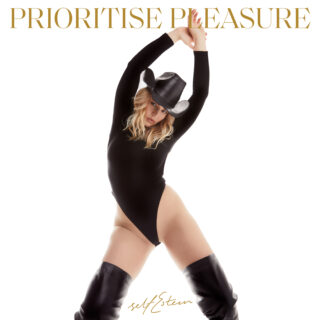