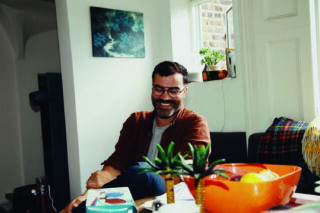 Brian d’Souza never intended to create a radio station. Ambient Flo began its life as a series of impromptu livestreams filmed in his back garden. When the world shrunk into itself during the first lockdown, and we were all looking for ways to reach outwards, those livestreams offered connection and calm for its viewers.

As a maker of warm and richly textured dance music as Auntie Flo, as well as a killer DJ, it would be natural for him to create a virtual club space, as many others have. Instead, he curated ambient music sets; a welcoming place to breathe and filter out the noise.

“For me, it was the obvious choice of genre,” he says. “Isolation calls for tunes that help you escape, feel calm and maintain sanity. For me, this is ambient music.

“Dance music needs a sweaty crowd and large soundsystem in a dark room… I figured I’d play music that had helped me find some inner peace, and do it in the mornings too, when no one else seemed to be streaming.”

Those sets morphed into a 24-hour radio station that offers not just gorgeous music but a sustainable source of income for the artists it highlights. Ambient Flo was designed using an Artist Profit Share system that places emphasis on collective support and fair pay, where 300 selected tracks are played an equal number of times each month. In a time of deep uncertainty and upheaval for our industry, the site looks for a new way forward, emphasising longevity and artist-led initiatives.

The website itself is a dream to use. Each month, leading voices in the genre curate playlists, separated into Morning, Daytime and Nighttime that offer distinct atmospheres. Morning is bright, gentle and reassuring. Daytime brings a stronger sense of rhythm and melody. Night is vast and otherworldy.  There is even the option to mix in natural sounds like birdsong, which can lead to surprisingly moving moments, like one moment this afternoon where gentle bird calls seemed to harmonise with Henrietta Smith-Rolla’s piano.

None of this was in view when Brian d’Souza first started recording.

“The first lockdown was a bittersweet time,” he says. “Obviously, everything stopped – there was massive and very serious health implications, which I don’t want to belittle. But for me personally, it was a paradigm shift moment.

“A level of stress that I wasn’t really aware of that had built up over years suddenly lifted. Plus, the weather was nice, and I got to enjoy the change of pace in life. Doing the livestreams gave me a focus for the week – I bought so much music and really loved sharing it with everyone who tuned in.”

The move from livestream to radio, though now clearly a good one, stemmed from humble beginnings, it turns out. The time and space required for the project became a problem for his family. “My young son loves playing on the decks,” Brian explains, “so my wife had to take him out when the live streams where on otherwise the nice ambient flow would have been interrupted by him scratching the records!”


He started thinking about ways to bring it to a larger audience. Frustrations with the economics of the music industry were also becoming more noticeable. Despite being an established name who’s released award-winning records (the excellent Radio Highlife from 2018 took home the Scottish Album of the Year), Brian doesn’t make any money from streaming.

“The only way I’ve really made money in music is through DJing. Not live gigs, not promoting events, not through my records and not really through any publishing or sync stuff. So when DJing was taken off the table as an option I started to look more closely at where the revenue gets distributed. The issues are the same as they’ve been since day one of the music industry – the creators always get shafted.”

Ambient Flo relies on direct audience support, which has been an early hurdle, as it has been for many musicians having to reinforce the perceived value of art in the pandemic. “I think fans have a responsibility to be aware of how this all works,” says Brian. “If they pay £10 a month for Spotify, that is fine if you feel you only get £10 worth of value out of all the music you listen to. If music plays a much bigger role in your life, figure out ways to pay more.” Accordingly, Ambient Flo is a free station, but listeners are encouraged to support it, with their money being split between the monthly featured artists and the running costs of the site.

Ambient Flo is proudly about the power of human curation. Though working with music often used for background listening, there are distinct voices, moods and cultures playing out. January’s selections were curated by KMRU, who is currently one of the most celebrated figures in the genre. His selections have a distinct tactile quality, filled with gorgeous decayed melodies and an ineffable eeriness. Even the most cavernous and blurry music on Ambient Flo has a deep sense of human connection for the listener because you know someone on the other end chose this music for you to hear.

“We always seem to crave efficiency over excellence, and with an algorithm you might save some time, but you lose the human touch,” says Brian.

“I want to build a relationship with the listeners to Ambient Flo and select songs with care and attention, in the same way I’d do with a DJ set. This way allows me to bring a far more diverse, interesting and unique selection every month.”


So what have been his favourite picks as a fan?

“It was great to get Keith [Optimo] in as the first guest curator,” he says. “I’m forever in awe of his music knowledge and taste and knew he’d do an amazing job.

“His compilation Miracle Steps helped introduce me to so many amazing artists across the ‘4th World’ and that helped me with a lot of the selections so far. Including John Hassell songs also feels very poignant. He’s the original originator, and it blows my mind that he is still releasing incredible music to this day.”

Nature and healing are both prominently featured on the website, and it was the direct response from his audience that led to birdsong being featured so prominently.

“I did those from my phone microphone, so it picked up the sounds of my garden, as well as the music. The birds were in full voice in those months, so they really became a feature for a lot of people. I realised that a lot people don’t have much access to nature whilst in lockdown, and that is so important.

“There is a whole field called Biophilic Sound that promotes the benefits of listening to natural sounds. That certainly resonates with me.”

Brian’s background as a psychologist has also influenced the project. Personally speaking, before lockdown I was a bit of cynic when it came to meditation and the power of nature, in part because of the corporate sheen around the culture of it. It’s disheartening to go to your GP while in a deep depression due to factors outside of your control just to be told to download Headspace because the NHS doesn’t have the funds to deal with you. Ambient Flo has been one of the key things that’s helped me untangle that attitude. It offered an accessible and welcoming way into meditation.

“I’ve learned a lot more about music theory through studying sound therapy,” Brian says. “Understanding intervals, frequencies and resonances help me understand at a deeper level how a song affects us.

“Of course, a song contains much more information than its constituent parts, whether that’s the culture or scene that the creator belongs to or the genre that song fits, so it’s important to recognise all aspects when it comes to music curation.”

That the station manages to be so distinct and personal while working with music made for background listening is completely remarkable, and I’m keen to ask Brian about how an ambient artist approaches those competing sides.

“There are merits for some of this music to be made as ‘wallpaper’ or to be played in the background,” he says. “That was the essence of what Eno was talking about when he coined the phrase. On the other side, there are obvious merits from listening to music more actively, where the composition, layers and dynamics reveal something different every time. I’m trying to find a balance between these two competing paradigms – functional music, but at the same time beautiful and timeless, and for every song to stand up on its own merits as a piece of art, not bland and functional for the sake of it.”

This music has been close to Auntie Flo for his whole career, it turns out.

“Ambient was my first route into dance music in the mid-’90s. I was obsessed with Warp records and all the classic releases they put out at the time… I also loved Ninja Tune with the Xen comps, and remember booking Funki Porcini for a club night around 2002. He played a set so chilled he even fell asleep in the club!”

Diving into Ambient Flo has been a great tool for my own productivity. It’s given me a way to focus and relax simultaneously. It’s also given me a handful of new artists to fawn over.  I’ve fallen deeply for Ana Roxanne, KMRU and Pauline Anna Strom while listening. For Brian, it’s, “Tim Hecker all day long.”

“I have four or five of his albums downloaded onto my phone and they are basically all I listen to. The composition is so fluid and layered that the music sounds new every time I listen.”