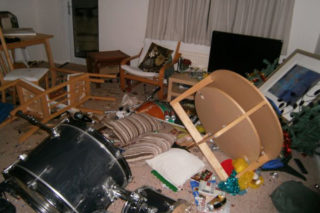 Yeah, it’s not so fun… and kinda perversely exciting

As a teenage girl and an avid music fan, it was my not-so-secret fantasy that one day I would go out with a musician. It would go like this: I’d be standing front row at one of their gigs, devotedly screaming out all the words to their songs. We’d lock eyes, and he’d interrupt the whole gig to whisk me away backstage and beg me to go out with him. I’d try and play it off all cool and collected, but ultimately I’d put up little resistance and melt into his arms in a fit of teenage passion.

I spent my adolescence transferring this fantasy from one musician to another, willing it into existence with every fibre of my being. It almost didn’t matter who it was; the fantasy was more powerful than the person. I was drunk on the idea of being close to music and musicians. It was incredible to me, and still is, that anyone could sum up the length and breadth of the human experience in a four-minute song. As a way to figure out my fascination with music and the people that make it, I started writing about it. I created my own music blog, where I’d document the gigs I went to, the CDs I bought and the bands I discovered. It’s embarrassing to read back on those early bits of writing, but it was an important phase of me discovering my voice as a music writer, teasing through my tastes and critical capacities, and beginning to be able to distinguish quality music from the dazzling star quality of its creators.

When I got to university, I signed up to write for the music section of my uni paper with no expectations other than advance downloads of my favourite bands’ new album and the hope of interviewing my latest music crushes. I didn’t expect that, as a result, my teenage fantasy would become real.

One night, I went to a gig for a local band, hotly tipped as the next indie heartthrobs and signed to a Sony subsidiary label. The lead singer got back onstage after the encore to announce that they were having a house party at theirs and everyone in the audience should come. Reader, of course I went.

The party itself felt like a scene in an American rom-com: raucous, coloured by the salted caramel-flavoured whisky that the band’s publisher had picked up from the corner shop. I chatted to some of the coolest people I’d ever met in my life with a self-conscious nonchalance that didn’t hold up under scrutiny. I went to bed in the wee hours of the early morning in a haze, bedazzled by my new musician friends and the nagging feeling that it was, in the words of Almost Famous, all happening.

A month later, I was going out with the drummer of said indie heartthrob band. In the thrill of moving away from home, finding my independence as a young adult and starting university, this new relationship was almost too good to be true. Most days, it felt like I was floating in a dream. All of a sudden, I was being offered guestlist to festivals and gigs as the drummer’s girlfriend; I was meeting other, bigger bands that my boyfriend had played support slots for; he was even writing songs about me. Of course, I fancied him as a person, but I’d be lying if I said I wasn’t drawn in by the glamorous perks of going out with a musician.

Then, nine months later, it all came crashing down. It’s a tale as old as time: the lead singer split to chase a fleeting solo career, leaving the rest of the band high and dry. In the space of a few hours, I watched my boyfriend lose it all. That day, he lost his livelihood, his motivation to make music, and even his back catalogue, which the lead singer deleted from every online platform in an out-of-the-blue underhand move.

I was, of course, devastated for my boyfriend. For the first time in my adult life I had to step up and take on the responsibility of supporting a loved one through trauma and hardship. Convinced he would somehow work his contacts and be signed again within a week, he was at first surprisingly casual about the whole thing. Days, weeks and months passed, and the fated call still hadn’t come. I watched my boyfriend, and these wonderful new friends I had made in the band, crumble. Their mental health took a beating, their confidence was almost entirely shot, and they floundered, unsure of what or who they were without the band.

I had read about band breakups before as a music fan obsessed with the oral history of pop culture. I knew, factually, that it would be messy and bitter. What I wasn’t prepared for was how it would feel to me, as the girlfriend of a band member. Being in a mainstream indie band means that you sell your personality for plays; when this was stripped from him, I saw my boyfriend lose the very essence of who he thought he was. In the initial fallout, I had to help him rebuild this. This was a demanding and exhausting process of heated late-night discussions about what would come next and tears cried in shame and anger by both of us.

I had to square this demanding emotional support with the strange dissociated sense of being part of something that had a vague cultural significance. The journalist in me was perversely excited by being caught up in this event; the music fan in me was disappointed and mourned the music they’d never make; the part of me that was a girlfriend and partner had to suck all this up and just be present.

Four years on, and I’m happy to say I’m still with the drummer. Life has a funny way of going on, and the band breakup wasn’t the apocalypse that we thought it was at the time. My boyfriend is making better music and has more creative freedom now than he ever did in the band. Although in his mid-twenties, he decided to start a BA in music production as a way to get back into doing music full-time and hone his skills while forging a strong network of collaborators. It may not be what he’d necessarily envisioned for himself after the band broke up, but I’m proud of him for taking his time.

That said, the split still ripples through my life now and then. Sometimes the odd fangirl from a bygone era will thirst-comment on his Instagram photos and ask when the band is getting back together. There are many ways in which I’m still supporting my boyfriend through the mental health problems he was left with after the band broke up.

The whole experience put my own life under the microscope. As a fan, I regarded band breakups as hallowed cultural events that I had a right to comment and have an opinion on. Seeing the same experience unfold in my own life taught me that the breakup of a band has the potential to be as traumatic and gut-wrenching as a divorce. In a creative partnership like this, you share the most intimate parts of yourself with your bandmates on a regular basis, with an  intensity that’s otherwise rivalled only in your romantic and familial relationships. It’s not some cultural landmark to be pored over by critics and fans alike; these are real people with real lives.

Coming out the other end of it, I had to learn to quell the fangirl in me to be able to be an adult and support my loved ones through it all. It feels dramatic to say that a piece of me died when the band broke up, but she was definitely left by the wayside.