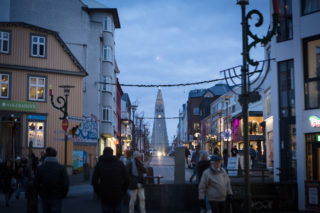 It was all about the vocoders, venues and vistas in Reykjavík in November

People go to Iceland and come back with two TripAdvisor comments – about the relentless beauty of the place and how upsettingly expensive it is, always illustrated by how much a pint costs (a tenner). Since the Reykjavik-wide Iceland Airwaves, I’ve become one of these haughty Phileas Foggs obsessed with the price of alcohol – trait as true to the British as talking about the weather (Iceland is cold).

To really experience the awe of the country, I learnt that you should take a short drive out of town, although the walkable city of Reykjavik also has a handy vista of snowy mountains facing it on the other side of the waterfront, as if it’s been put there by Instagram. The cost of beer is what it is, and extends to the cost of everything else: perhaps the truest indication of Airwaves’ greatness is how much our team enjoyed itself while three of us shared a Dairy Milk for lunch one day.

Considering the festival is five days in total, we allowed ourselves to begin in a counter-intuitive fashion with a screening of Olafur Arnalds’ new movie Island Songs – a film that elegantly boasts of Iceland’s volcanic panoramas as it follows the neo classical pianist on a journey to the homes of seven indigenous musicians (including a choir master, a poet and a church organist) where they then set up a portable recording studio and compose and record a song together for an album of the same name. It’s a humbling, beautiful film that you can now find on iTunes.

Always nearby is one of Airwave’s ‘Off Venues’, where we enjoy that Diary Milk and get an initial sense of the community spirit of the festival. Over the heads of a couple eating fish soup, one local woman making a shopping list and a family of tourists trying to ignore the whole thing, we see KRÍA perform her twisted RnB about politics and conspiracies through a tonne of autotune (vocoders are currently big in Iceland, with mixed results from the likes of the Drake-lite Aron Can), in a family-run restaurant with lanterns on the wall. Off Venues like these (there’s hundreds of them, from bookstores and record shops to boats in the harbour and the public library, where we find a death metal band called Nexion) are key to Airwaves’ inclusive feel and the support of local artists. They’re free for everyone and sprawl the whole of Reykjavik, so when you hear the sell of ‘Iceland Airwaves takes over the whole city’ it’s not some tourist board half-truth. 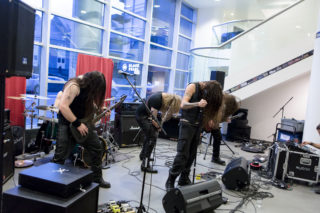 With much of the daytime line-up consisting of new Icelandic musicians with limited bios, the game we play is a pin-in-the-map exploratory one, ticking off bars and venues along with the artists themselves. IDA Zimsen Bookcafe gives us the pleasant but not thrilling Rökkva, who sound like Damien Rice, so we go hunting for Slugz purely on her name, and eventually find her at her final show of four at Kaffibarinn, a cosy bar co-owned by Damon Albarn. She stands over a laptop resting on the bar and ignores the gentle candlelight as she pummels the room with sound art made from archive dialogue of an American talking about Icelanders having sex on their first dates – and the voice of Paul McCartney. The ‘strangest’ thing we see all week, it’s worth the run-around.

At Loft (you can guess what that place is like), Big Muff enthusiasts Godchilla are a fuzzy reminder that bands are thin on the ground in Reykjavik as its burgeoning hip-hop scene blows up. In front of a driving POV videogame projection, and over sludgy surf riffs played exclusively on the low E string of the bass guitar, they growl lyrics like, “Get away from me you little shit,” and tentatively jump into the crowd. They make way for an untimely but welcome booking – Grimm Grimm, whose frazzled space folk from 2015 is crying out for a follow up. (Instead he plays songs from ‘Hazy Eyes Maybe’ and a Misfits cover of ‘Hybrid Moments’ in his dreamy way.)

We wander up and down the High Street, down to the docks and back again, past the Punk Museum and the Penis Museum (ok, so this is the real talking point for Trivago), much in this fashion for five days straight. It never gets boring even when you hit a run of shoddy shows, because the spaces they’re in are something in and of themselves, from KEX Hostel where Lido Pimienta delivers a fierce performance of trad Columbian percussion and synth pop, to the sightseeing boat Andrea where we see Minneapolis group Graveyard Club who sound kinda like The Bravery but hey, we wanted to sit in a boat for a while and all the autotune was getting us down. 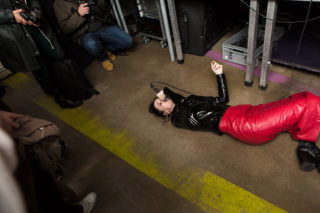 Each day the official program gets going at around 7pm, spanning a variety of larger venues and classic dive bars, and hosting more familiar international acts. Benjamin Clementine delivers his theatrical new show fittingly in Reykjavik’s old theatre, where he paces the sparse stage and serenades three mannequins from GAP, only to take sporadic breaks to scoot around on a bit of scaffolding. Never mind sitting behind his piano, there isn’t one in sight – he booms to a backing of his own playing and a live drummer and bassist in matching boiler suits. It’s a trip – one that earns him a standing ovation.

The atrium of the Art Museum is a bit of a night-time hub, where silly monster rock band HAM play to a full room, and where Sigrid proves that she’s going to be a huge pop star in 2018 – a scientifically constructed act from the people at Universal, it can’t fail, and probably shouldn’t on the strength of the Norwegian’s vocals performance and scrappy attitude.

It’s also here where Reykjavíkurdætur leave their yearly mark on the festival. The local feminist rap collective – tonight 11 members strong – enter to slow bass drops that fire in time to flashes of white light that illuminate the group’s silhouettes. They’re all wearing swimsuits as they stand below spinning Love Hearts that spell out the web-friendly abbreviation of their name (RKVDTR). They pause for a beat and then begin rapping hard. Due to their gender, the group were originally rejected by Iceland’s hip-hop community – dismissed as a joke – but naysayers will need to think of something truer than ‘they can’t rap’ to keep that up. There’s just the right amount of chaos going on for Reykjavíkurdætur’s message of equal rights and sexual freedom, and when the next rapper up isn’t dashing for a free mic to deliver her barbed verse down, members are bating the crowd, bending each other over or, in an inspired moment, drinking shots from butlers in buff and climbing on their shoulders. 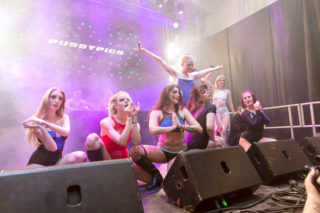 Reykjavíkurdætur’s splinter groups that also play the festival include Fever Dream, who’s best when she’s rapping her message of veganism in Icelandic rather than English (and before she invites her bossy younger brother up for a final number at her performance in a CND campaign centre) and the trio-cum-quartet Cyber – a real discovery of the five days – theirs is a slower, sexier brand of hip-hop, with songs about skiing in Aspen, eating cheese and having sex. I also like that halfway through their opening song at the quayside bar of Slippbarinn they announce that they need a power nap and lie on the floor.

There’s plenty more besides, of course – brilliant acts we already know, from Kelly Lee Owens’ techno closer to Nilufer Yanya’s staccato, lounge greatness – but Iceland Airwaves isn’t so much about that. Perhaps it’s because it’s out there in the middle of nowhere, but it feels most like a festival of discovery; to tap into an arts-based city and its community feel. Pack more chocolate, but go. 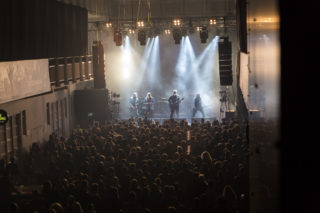