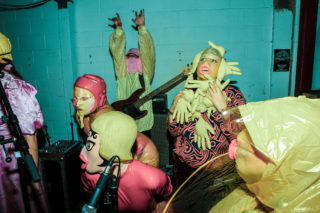 Keeps your steps up for the day, too

In my own opinion the key to a successful festival is diversity. Don’t get me wrong, I love hardcore and acid house as much as the next guy/girl, but unless I’m in the mood facing nine hours of the same thing can be pretty hard work. That’s why I’ve always tended to enjoy festivals more than all-dayers. When they’re done right, there’s always something new to keep you guessing.

Diversity was definitely the name of the game when it came to the inaugural Test Pressing Festival. Either by accident or design, this new one-wristband, multi-venue festival taking place among the warehouse spaces and new bars near Tottenham Hale managed to cram in a kaleidoscope of different settings, atmospheres and genres; even with the site being bisected by a huge retail estate, which means to get from one to the next you have to stroll past Carpet Right and The Carphone Warehouse. 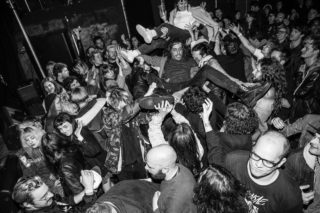 Leaving the photographer to watch Lone Taxidermist wrap the crowd in cling film (top), we headed to the other side of the festival to see Croatian Amor play Five Miles. A brutalist bar and brewery, complete with monolithic concrete walls and sinister red lighting, the location fitted with the Copenhagen-based producer’s menacingly seductive soundscapes perfectly and was the ideal way to ease ourselves into a night spent wondering around N17.

With no real plan in mind, we trekked across to the other end of the festival to the warehouses near the station where the more psychedelic-leaning bands on the bill were playing. We managed to make it to see DUDS as the wound up their slot. The first British band to sign to John Dwyer’s Castle Face Records, their sound might lean more towards the tribal, motoring post-punk of ESG or Liquid Liquid than Thee Oh Sees’ more naturalistic space rock, but that doesn’t stop the crowd throwing themselves around like maniacs.

Thirty seconds later, we stumbled straight into I.R.O.K as they started their set next door. Mixing the afro-futuristic funk of Parliament with the ‘bovver’ dance of the KLF or mid-career Prodigy, their set up kicks off with lead singer Mike Title belting out Tottenham Hotspur songs at the top of his voice. Dressed in a white gown and coming across like Jimmy Pursey meeting a cult-leader, he spends the first couple of songs leaping into the crowd and scaling the speakers imploring those there to join in the madness. Eventually, the soundman who was clearly concerned about the battering his equipment was getting stops the gig and sternly begins to lecture the band on the cost of P.A. cabs. It might have broken the fourth-wall a bit, but in terms of pure surreal spectacle, it takes some beating.

After a bit more exploring, we end up at Styx; a massive industrial warehouse-turned-weird-tiki-bar where Test Pressing’s main headliners are appearing. Fuelled by some of the strongest tasting rum punch I’ve ever come across, we watched Metz use their typical intensity to deliver a greatest hits set of sorts. Next came Miami’s Jacuzzi Boys, whose mix of riff-soaked garage pop and infectious energy send the packed-out crowd into an ecstasy of slam dancing and crowd surfing. 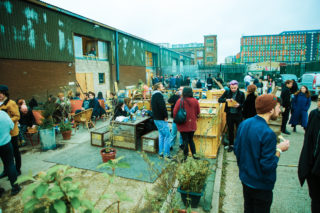 Swerving genre lanes again, Xeno and Oaklander are the last band we manage to catch. While on record the Maryland two-piece are almost comically cold and aloof, in the flesh they dish up pure, unadulterated pop. Manipulating a table of synths and spaghetti-like mess of cables, the pair coaxes out an hour and a half of gloriously melodic synth-pop that lands somewhere between Factory Floor and Eurhythmics.

All in all, Test Pressing’s debut year can only be described as a success. A 12-hour joyride through a wilderness of moods, genres, and spaces meant that the whole experience flowed together impressively, while the vast spaces and the good number of bars saw to it that there was never really any problem getting in to see anything. Even the sprawling festival site wasn’t that much of a problem (hey, get those daily steps in). Although it does make me wonder how the organisers will expand next year. Maybe they’ll convince Burger King to let them set up some bands on in their drive-thru? It’ll be exciting to see what they come up with next.

New offer! Subscribe to Loud And Quiet magazine and gift a mate three months for free