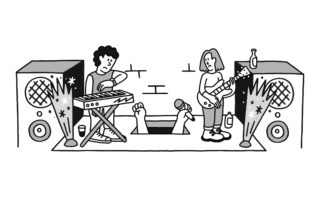 Everybody knows that the best part of any gig is the opening thirty seconds. The ultimate worst part is the encore, but it’s all downhill from the moment after the band has walked on. That’s how good those thirty seconds are.

Firstly, you’ve got the shock of first sight, which is impossible to replicate. I mean that moment when Beyoncé, say, is suddenly in front of you. You’d never seen Beyoncé in the flesh before, and now, all of a sudden, you have. You are in a post-I’ve-seen-Beyoncé’s-actual-skin-with-my-own-eyes universe now, and you owe it to yourself to enter that world at the soonest possible moment, not halfway through her set at the O2 because you were in Five Guys.

More than that though, you can tell a lot about a person from how they choose to enter a stage, like when the members of U2 spent a year jumping out of a massive lemon on their 1997 Popmart Tour. Loosely speaking (because I could go on about this forever) performers have five basic templates to choose from, for varying venue sizes. They are:

This is the factory setting of stage entrances; so ingrained in 100% of indie bands that you might be thinking I’ve overstretched myself in telling you there are four more templates to follow. What I will say for ‘walking onstage, picking up your instrument and starting to play your first song’ is that that shit is versatile. You can do it in your school assembly all the way up to Hyde Park and it’s not as if anyone is going to say, “It’s a shame the entrance wasn’t more original.” It kind of is a shame, actually, but especially if you’re starting out, probably best to concentrate on which member of your band must have spiked your drink with a strong laxative.

Send out the band

The smaller the venue, the cuter this one looks. It’s where the band come out and start playing and the singer saunters on sometime later and stifles a smirk when he (and it is always a dude) receives a bigger cheer than his mates did. It’s a cheer that confirms that the rest of his band are complete slugs, that his sunglasses look good, that he was right to demand that this is how they should start the show tonight, here in Luton. It was a dick move when Liam Gallagher made it his own in the ’90s, and although it’s still a dick move at 8pm in the Kings Arms, for the fourteen of us watching, it’s super bless.

I don’t think any band has ever performed this entrance more than once, on account of it being so unbelievably shit. Michael Bublé might have pounded it for a while, but that guy is from a lounge heritage, so fair’s fair. It’s almost like ‘Send out the band’ jumping the shark; where the band play and the singer pops up at the back of the room and makes everyone feel uncomfortable. It’s how Ant & Dec start Saturday Night Takeaway, but watch Mick Jagger’s ‘He’s behind you’ entrance to ‘Sympathy for the Devil’ in Martin Scorsese’s Shine The Light and no amount of loose skin can hide the look on his face that says, ‘Touché, old friends, you’ve made me look like a massive nob here.’ Basically, what I’m saying is, if your singer pulls a ‘Send out the band’ on you, goad him into a ‘He’s behind you’ (it won’t be hard) and watch him fall back inline.

You need to be in the big rooms to work the curtain drop, which is ‘shock of first sight’ operating at something like 5000%. It’s the Big Bang of show starts – first there was nothing; just a big, white curtain. And then, in what feels like a hundredth of a second, the curtain drops, a million torches shine in your eyes, Jarvis Cocker is stood on a box, the band begins as one, what must be fifty paramilitary troops or 2012 Games Makers gather the curtain and vanish into thin air. Your drink also appears to have been spiked with a strong laxative.

Because most pubs aren’t equipped with spring-loaded trapdoors – and fewer still will allow you to “improvise” with the hatch they drop their beer deliveries through – you’re going to have to work hard to even have this entrance on the table. Then you have to ask yourself if the spring-loaded trapdoor is for you. The big question is: do you intend to be vigorously dancing throughout your show. Well? Because if you intend to pop up through that floor with all the promise of a Justin Timberlake or Taylor Swift show, only to walk over to your guitar and start playing your first song, there’s another option for you. Don’t shit on the trapdoor, okay?