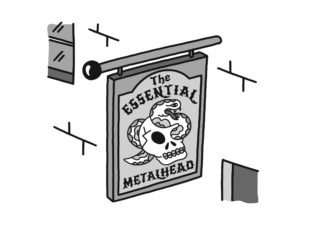 Just as heavy metal is grossly underrepresented and unfairly ridiculed as a music genre, despite its having far more in the way of radical possibility than almost any of the buzzy indie that so plagues much of the contemporary music press, so is its physical lifeblood: the metal pub.

In many small towns, not to mention the more parochial, less trend-conscious districts of major cities, the metal pub is the music venue. That was certainly the case in the town where I grew up, and the metal pub that’s most local to where I live now – The Bird’s Nest in Deptford – remains a bastion of a resolutely anti-fashion, largely working-class subculture despite the blundering encroachment of rapid gentrification into the area. It’s a classic example of its type: dark, a little dingy, with a cramped stage in one corner, tucked away from what little light gets through the Dickensian windows. Nearly every visible surface is adorned with stickers, posters, graffiti, and suspiciously miscellaneous discolorations, evidence of the enormous range of people – bikers, hooligan firms, anarchists, punks, and lots of metal bands – who have passed through the pub down the years.

Pints aren’t that cheap – this is, after all, a London boozer first and foremost – but the prices aren’t silly, and they pour the Guinness properly. The pub’s stoic troupe of regulars, the like of whom are conspicuously absent from the more on-point bars in the area, are perhaps evidence of that. There are a few customary old-school South London geezers, but beyond that, the clientele is much the same as in equivalent pubs throughout the country. This is where the weirdos drink: the permanently stoned ex-roadies, the face-tattoo crusties, the translucent mutterers who exclusively live on Heineken, cigarettes, and the occasional bag of dry roasted. It’s a good crowd.

As utterly vital as campaigns to save the more directly essential grassroots music venues and underground industry players are (recent appeals to fund London music venues The Social and DIY Space for London, for example, or the grimly familiar appeals to readers of key publications such as this very magazine – it’s important to recognise the less glamorous parts of the new music ecosystem, too. Pubs like The Bird’s Nest might not be the places to go and catch the next big thing, nor are they designed to host much in the way of radical ideas per se, but they represent an indispensable entry point into rich seams of alternative culture that may otherwise be, if not inaccessible, certainly remote from the layperson. If the band’s good, the regulars might watch for a bit. If not, they might nip out for a fag. The most likely outcome in either scenario is that the majority of drinkers will glance across briefly, pull the Motörhead t-shirt back down over that last sliver of belly, and return to their conversations. And that’ll be it.

My first real encounters with live music were in metal and biker pubs. I remember gingerly joining a family friend onstage in a room that, long after the smoking ban came in, stank and indeed looked like an ashtray, wobbling through a few chords on my £100 Ibanez, and squeezing back through the crowd of burly men in motorbike leathers, still trembling a little with pubescent nerves. When I got (slightly) older, the pub my friends and I used to drink in, way before we should’ve been able to, was a Bird’s Nest-like place in the middle of town, and the only establishment that even approached consistently functioning as a music venue. Most of the acts were pretty suspect, but chances were that a night of shit rock and cheap beer in there would be more fun than the alternative: a few tinnies on the train into the nearest city, promptly followed by being turned away from a more illustrious show for being underage.

I think what makes these places so special is the utter lack of pressure. The drinkers in The Bird’s Nest have no interest in looking cool; if they were, they’d be drinking in one of the upmarket railway arch bars off Deptford High St. Who knows, maybe they’d even buy a new Maiden t-shirt. But pubs like this allow people to experience alternative culture in the most basic, introductory way, and as such play host to as much incidental brilliance as they do ham-fisted covers of ‘Back In Black’. Your local metal pub is an essential and underappreciated rung in the cultural ladder, and should be valued as such.