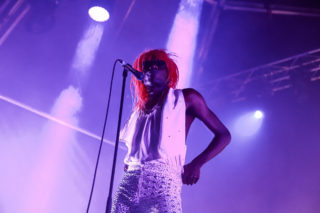 And not just because of the flaming red hair

Emerging from Knoxville, Tennessee via a stint in Los Angeles’s experimental, post-chillgaze scene of the early ‘10s, Yves Tumor’s move to Europe in 2016 seemed to ignite a rapid metamorphosis. The producer has gone from a legendarily erratic button-pusher, to a full-on pop act. However, since dropping Safe in the Hands of Love at the end of last year, a further internal switch has clearly been toggled. The Yves Tumor of 2019 has transformed into some sort of Prince/Tina Turner hybrid.

Striding onto the Pitchfork stage tonight, Tumor and his band look like the avenging ghosts of early ‘70s rock. A riot of leather trousers and hairspray, Tumor sports white rhinestone flares, halter-neck top and fire-red hair. It’d be easy to think that you’re watching some sort of Lenny Kravitz cover band, if it wasn’t for the sheer confrontational energy pouring from the performance.

In fact, this is a bit of an about-face for Tumor. In recent years, the producer’s live appearances have garnered a reputation for being physical affairs. From busted noses at a show in Brixton to scuffles with skinheads and charges into the crowd. This might be an altogether different presentation, but the lingering sense of bubbling menace is still there – it’s just more controlled.

Sticking predominantly to tracks from that latest album, this rare, full band gig moves out of experimental drone and tape hiss and warps into a more straight-laced take on R&B and alt-rock. The result is, by Yves Tumor’s standards, an accessible show. The addition of a live bassist turns brooding slow-burners like ‘The Feeling When You Walk Away’ into shimmering disco tracks. Even the menacing ‘Noid’ is completely flipped on its head, turning it’s threatening energy into something that sounds like a Nile Rodgers song trapped under ice. The fractured ‘Licking An Orchid’ comes across like a lost track from Daft Punk’s Discovery.

In a way, Tumor is perhaps the purest expression of the inclusivity that Primavera Sound is embracing with their 2019 edition. With a line-up that stretches from Janelle Monáe and Charli XCX through to Nitzer Ebb and Jawbreaker, the festival wants you to look over the parapet of your particular tribal bubble and accept, judgement-free, what’s going on over the other side. Tumor is this message delivered like the montage-scene in A Clockwork Orange. Intense and belligerent, yet undeniable all at the same time. You can’t take your eyes off it. 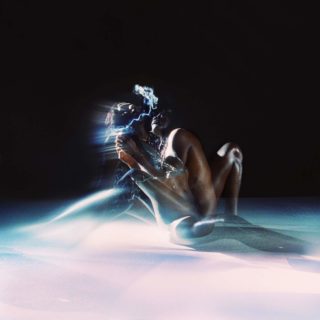 Think you've got your head around Yves Tumor? Think again