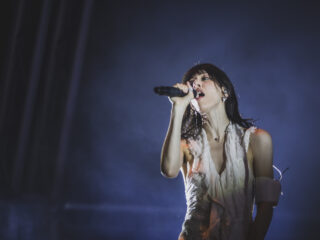 The last time Caroline Polachek played Primavera was six years ago, on the same stage as she does this evening beneath the site’s enormous photovoltaic cell. Back then, she was fronting her small but perfectly formed indie electro band Chairlift, performing what turned out to be their final album to a modest-sized crowd. Tonight, things are rather different: for one, the arena is now crammed with Polachek stans who know every word to every song and woop hysterically at any gesture she makes, and for another, the show she presents is far more difficult to make sense of than Chairlift’s lithe and streamlined ’80s-infused pop.

That’s not to say the music is difficult in itself. Indeed, 2019’s Pang, Polachek’s debut solo record from which most of tonight’s set is drawn, is almost wilfully accessible, mainly devoted to the intersection of the edgeless, anodyne world of Enya and a very specific period of clean, slender, turn-of-the-century chill-out compilations dominated by William Orbit’s laser-precise production. That Pang on record is then filtered through the modern-day post-Spotify landscape of PC Music definitely adds uncanny piquancy there, but the live incarnation here, performed to click track and precision choreography, dulls a lot of that nuance. 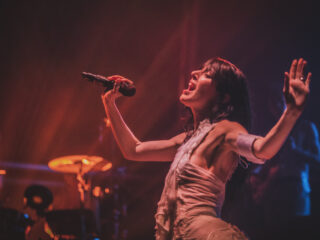 Instead, what you’re left with is an enormously talented singer – a sort of hyperpop Mariah Carey unafraid of operatic yodelling – showcasing her technique with a series of songs that sound like The Corrs, and one that actually is The Corrs: Polachek’s cover of ‘Breathless’, now a key part of her show, sends her public predictably wild with glee tonight, but that doesn’t make the actual song any less naff than it was in 2000, and actually ends up emblematic of the show in general. Tonight’s evidence suggests Polachek is reaching the stage where she can do anything and her fans will lap it up, and much of this set, more aligned to mid-paced ’90s Disney ballads than anything more substantial, seems designed to stress-test that theory.

A closing trio of ‘Bunny Is A Rider’ – an undeniably brilliant slice of future-facing cyborg pop – the poignantly self-effacing ‘Caroline Shut Up’ and ‘So Hot You’re Hurting My Feelings’ are performed with far more elan than the earlier fodder, and their placement at the end suggests Polachek understands their potency well enough. What her motivation is for the rest of the set, however, is anyone’s guess.