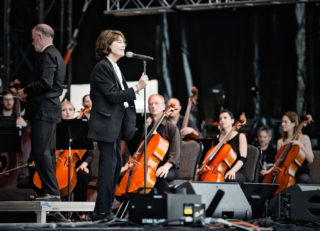 Well, it had been three nights with very little sleep

Primavera Sound’s main SEAT stage is used to handling its fair share of people on any given day but the vast number of musicians that pack it out as part of Jane Birkin’s symphonic orchestra tribute to her late partner and collaborator, Serge Gainsbourg, must be a new record. Stood in front of the tens and tens of players is Birkin in an elegant and sharp suit, her voice immediately understated yet poised as the orchestra slowly winds up.

What then follows is a performance that is both immensely powerful and deftly restrained in equal measure, with the weight of the orchestra often swelling and then shrinking like some majestic living and breathing organism. As Birkin works through a version of ‘Baby Alone in Babylone’, she almost seems lost in the moment, her eyes slightly distant and entranced as she bathes in the waves of the strings that gush forth from behind her. It’s these moments that become the most poignant throughout the evening; several times Birkin turns to face to her company and seems to soak up the moment, looking reflective as she exists in the memories of the songs and the soaring interpretations of them.

As she then works through tracks such as ‘Valse De Melody’ and ‘Une Chose Entre Autres’ things only become more magic. Over an hour and a half the intensity, elegance and grace of the performance grows. There’s a fragility and tenderness to Birkin’s voice that sits nicely as songs performed in memory, with her tone feeling reflective but not nostalgic or overdone. 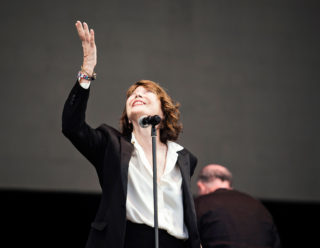 In fact the 71-year-old looks so constantly moved by the whole situation that even watching her becomes an emotionally testing experience in itself; she often clutches her chest as though her heart may break free from her own rib cage and she smiles constantly at the love, adoration and size of the early evening crowd on the festival’s closing day.

“Who knows what he might have thought if he were here today,” she says at one point before beautifully adding “but Barcelona he would have been moved to tears by this. Bless you.” It’s one of many moments in which tear ducts are called into action and the sheer size, swell and intricacy of the ensemble performing these songs is itself often enough to trigger leaky eyes. Things look to end with ‘Jane B’ but then not once, but twice, someone runs on stage to insist she has time for another one. So clearly enthralled by the opportunity, the stage manager seems willing to break curfew.

“Thank you for making me so happy,” she says as she bows out as the full power of the orchestra thunders behind her with remarkable tenderness. But her happiness is clearly matched by the audience who cheer goodbye to a truly special and unique performance. 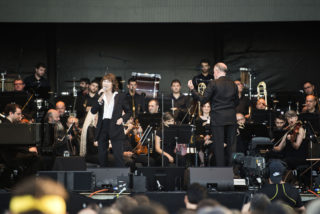