He revisits his teenage self for our latest Sweet 16 column

We’re in the Rocky Mountains in this photo. It’s me and my older sister, Susan, whom I love very deeply. It would have been 1984 and we lived in Parker, Colorado. That’s a good picture because I’m smiling, but that wasn’t often the case. Susan went away to a Christian university like we were all expected to do – she’s always been one of my closest friends.

Around then, we went to the cinema a lot and I was starting to drink with my friends from church. We’d go out and pretend that we were going to the same movie then just go and get beer. This dodgy American 3.2% beer that you could get at the grocery store that was absolutely horrible. We would sit in parking lots, drink beer and listen to the radio. Church was three times a week. Sunday, Tuesday, Wednesday.

School wasn’t a priority because I just wanted to have fun and listen to music all the time. Except for drama. My parents were very sceptical about allowing any son of theirs to get into that field so that was discouraged, but I was good at it. The teacher was Sally Smith, a huge figure in my life. There were also these three girls from California – Ty, Holly and Rachel – they were new wave punks with crazy make-up and hair. I worshipped them. I got into a lot of music because of them. They were these strong, exotic creatures, not afraid to be themselves.

Music was the most important thing. I wanted to nerd out about it with my friends. I’d have been listening to ‘1984’ (S/T) from Eurythmics – one of their best records. That’s one of my favourite movies, too. So amazing – John Hurt and Richard Burton. I was really into DEVO, Yazoo, Ultravox, Visage, Culture Club, Pet Shop Boys, New Order, Nina Hagen and Thomas Dolby. Missing Persons, Duran Duran – there was a lot of this new romantics stuff coming out of England. I was already completely in love with that. As I got older I started getting into darker stuff. I can’t stress how important how music was; it made everything possible for me. If it didn’t have to do with New Wave music, as we called it then, I didn’t care.

I was heavily into video games, too. Centipede, Tempest, Millipede, Q*Bert, Joust, Asteroids, Asteroids Deluxe… Those were the main ones. I’m still into those exact ones – you can get them on your iPad.

I had a job. I was working at a dry cleaners with two of the hottest guys I’ve ever seen in my life. I got fired for calling this woman a bitch, one of the rich customers that came in. I lied to my parents about that and said, ‘yeah, they just didn’t need me anymore.’ They didn’t question it. The probably thought, ‘yeah, right’.

I always weighed a 165 pounds soaking wet. I was super skinny and was always wearing an extra layer to bulk myself up. I could eat whatever I wanted and it was that way for a long, long time. I was always very self conscious about being too skinny, and made fun of.

I was very scared at that point, but I was still somewhat optimistic. I could see that I wasn’t becoming what I was supposed to become. I was in no way out to my family as gay yet and I was terrified because I realised it wasn’t going away. I didn’t think there was a place for me in the world. I probably thought that’d I’d be put to death for being what I was.

I couldn’t really talk to anybody about what was going on. Nobody. There might have been someone I could have talked to, but I was too terrified. Then I got intimate with one of my church friends – one of my best friends. That changed everything. That was 1984. I couldn’t talk about it at all with him. Not a single word. And that broke his heart because he wanted to be with me, and I probably wanted to be with him too but I just shut him out of my life. It was simply not possible. I find that really sad that I pushed that person away. 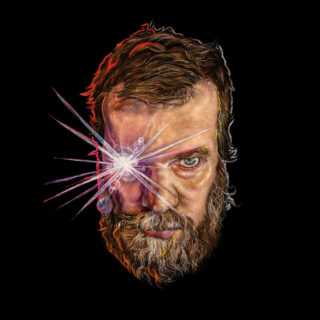 What is love? Love is a man with a birdcage on his head in mostly just his pants