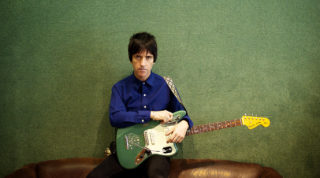 Everything you've ever wanted to know about the Smiths guitarist

Despite Johnny Marr’s legacy, he’s never not loved playing his guitar, whether it’s in The Smiths, Electronic, Modest Mouse or The Cribs. This month he releases case in point, live solo album ‘Adrenalin Baby’. We asked him to answer our Getting To Know Your questionnaire.

I dug up a fella’s muddy garden in the rain with Andy Rourke for 10 hours, on mushrooms. It turned into Apocalypse Now.

Driving at night after a show somewhere on the West Coast of America. Post-show serenity, work done, great place for an artist. I dreamt of it when I was a kid. I do it and I like it now.

‘Tired Of Waiting’ by The Kinks.

The Dalai Lama in London. He was great – said he loved my solo stuff.

My red Gibson 355 that Seymour Stein bought me when The Smiths signed to Sire records.

I took my girlfriend to the garden I was digging up with Andy Rourke.

Sunburst Gretsch Country Club guitar in 1986. I didn’t need it but I still have it, and a BMW 5 series on the same day. I just remembered that.

The British working class’s participation in its own decline.

The celebrity that pissed you off the most

The Perennial Philosophy by Aldous Huxley.

Still doing it after thirty years.

“Darling… it’s time… LSD… 100 micrograms, intramuscular, and read the Tibetan Book Of The Dead to me.”

I’d get a cool scar.