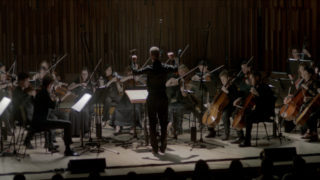 It included audience biometrics dictating the visuals on stage

It’s not every gig that you’re greeted with a 91-page score or an accompanying press sheet that credits the music by one person and emotions by another. The merchandise table is stacked with music from Keaton Henson’s varied catalogue, but there’s also poetry, ink paintings and a battery-powered book retailing at a generous £45, batteries included.

Henson has made no secret of his transactions with anxiety. His debut album of nearly a decade ago was folk-rock soaked in self-pity and romantic sadness. Long before the door had opened on a meaningful conversation about mental health, he had become the poster-boy of isolation for a generation coming-to-terms with the digital age. He had helped to humanise a part of the psyche that people were quick to diagnose but reluctant to discuss.

But despite openly admitting that buying milk in public is enough to test his comforts, there was still an expectation that he’d perform. His last few projects thus have been predictably solitary: curated playlists pre-dating Spotify’s “mood” excursions, classical melancholia (‘Romantic Works’) and daytrips into vocally-distorted electronica-cum-interpretive-dance (‘Behaving’).

Having thousands use his music to examine their own wellbeing is an important part of his new composition, ‘Six Lethargies’, played by Britten Sinfonia. Tonight’s premiere is an experiment into the mechanisms of empathy and self-removal: if music is a tool for communication, is a sad note always a sad note? If emotional experience is shared and can be materially exhibited, can the sketchy lines between physical and mental health be systematically rubbed out? 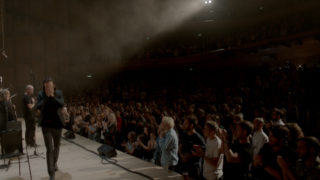 The first pieces are gorgeously melodic. A series of staccatos fade gently into silence – there’s no questioning its sadness. Even a cellist knocking over her music stand and a woman behind us asking if they’ll play ‘Sweetheart, What Have You Done To Us’ don’t detract too heavily.

The visual display has been coordinated by Brendan Walker, a biometric artist who is monitoring a small section of tonight’s audience for their electrodermal reaction to the sounds being played. Data collected on their emotional response will control the lighting. Sure enough, the third lethargy titled ‘Trauma/ In Chaos’ begins with flickering lights over a vibrating minor chord. The Barbican begins to look like a long school corridor.

Building slowly into something more impactful, ominous sounds are met with part-strobe, part Morse Code. It looks fantastic and the concept is absorbing, but the result is unclear. While the effect tries to make mental health a shared experience, the results of the projected sequences are ambiguous.

A red hue falls over the players as the final lethargies blend into one beautiful piece. Nothing sounds out of place to ‘Romantic Works’; there’s no discord that isn’t resolved peacefully – no tempo shift that doesn’t end with calm.

There’s little use comparing one person’s experience of mental health with another’s, but there’s too little turbulence for the biometrics to display an interesting conclusion. As Henson ventures onto the stage at the end, one woman’s well-intentioned declaration of love is enough to dissuade him from saying anything other than a high-pitched “thanks!” ‘Six Lethargies’ might not be the piece to contains the answers, but the questions it asks of music’s capabilities within mental health has started the discourse down a fascinating path.