Our Albums of The Year list is in this issue too – can you imagine!? 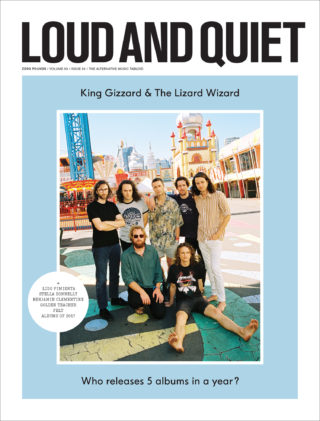 It’s not just us who’ve enjoyed these halcyon days. King Gizzard & The Lizard Wizard promised to release 5 albums from January until December. They’re currently one short, but I’ve never been wrong before and I’m sure they’re going to do it.

We certainly liked the sound of this ridiculous plan when the band put it out there at the end of 2016, and probably pencilled in their cover feature (in stores from December 9th) around the time it looked like they were actually serious, when February’s ‘Microtonal Flying Banana’ was followed by their horror rock album ‘Murder of The Universe’ on June 23rd.

Others who have wowed us include Benjamin Clementine, who features in this issue, where you’ll also find the Loud And Quiet Top 40 Albums of the Year (a novel idea we came up with) and a 2017 customer survey answered by Sleaford Mods, Slowdive, Nadine Shah, Wesley Gonzalez, Idles and Self Esteem.

There are new artists Stella Donnelly, Lido Pimienta and Golden Teacher, and a pretty special interview with Felt leader Lawrence.

We went to Reykjavik for Iceland Airwaves – where we shared a chocolate bar for lunch – and Stuart Murdoch is this month’s Sweet 16 interview, providing the best photograph for the column yet.

Let’s give it up for 2017 – the year that Gemma Collins fell down a hole and absolutely nothing else bad happened.