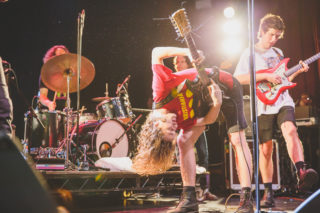 Shame, Methyl Ethel and The Parrots also played across two floors for the Strange Waves show.

It’s been a long time since I’ve seen beers spontaneously thrown in the air, looking like solar flares under the red stage lights, as a band kicks into their first song, but King Gizzard & The Lizard Wizard can summon that level of enthusiasm.

Their if-Swell-Maps-had-practised-and-did-Zappa shtick, played fast, fuzzy and clever, makes them a near perfect live band. The tracks from ‘Nonagon Infinity’, the new cyclical or nonagonal – as the name suggests – album, are intentionally composed with a type of internal coherence created by reusing and adapting a set of rhythms and phrases.

It’s ambitious, something you might expect in jazz or electronic music, but in spite of the high-minded concept the Ritz was shaking. 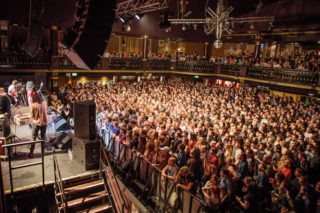 The bassline that underpins much of this unity (the bassline from Swell Maps’ ‘Full Moon in My Pocket’) adds real intensity. It was hard not to dance, but, at the same time it’s music that’s hard to dance to: their propensity for switching time signatures makes watching people try to dance as much fun as listening to the music itself. What more can you write? If you get chance, see them. Let them hit you with a wall of noise and watch 21-year-old stoners who have had 12 pints try to dance through changing time signatures. ‘Cellophane’ sounded huge.

The Big Moon and The Wytches were the only other bands on the bill that, this evening at least, I considered nearly as interesting or enjoyable. I assume the line-up was an attempt to replicate King Gizzard’s infamous Australian tours that bring together the local psychedelic rock scenes and sometimes involve circus tents. You can’t fault the ambition of trying to do that here, but it didn’t quite reach those lofty heights. 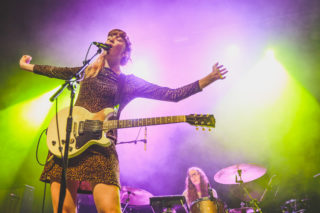 The Big Moon are, nonetheless, as charismatic as it gets with a distinct pop sensibility, gigantic harmonies and the ability to wrestle their guitars into a space somewhere between Elastica, The Breeders and something from Pebbles. They do a Madonna cover – it’s groovy but I’m not into it. Everyone else seemed to be though and the room was burning up.

The Wytches offered something darker which, coming after King Gizzard’s technicolour, unfortunately sparked a mass exodus. Those who were left benefitted: more space to breathe and hear some noir-ish psych-rock reverberate around the room. 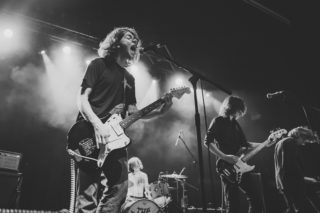 Otherwise, The Parrots get a pass. From the wall-obstructed sound of it, they were great, but a heavy handed bouncer wouldn’t let me into the venue’s downstairs room because it was full. It wasn’t full. People seemed to be enjoying themselves. 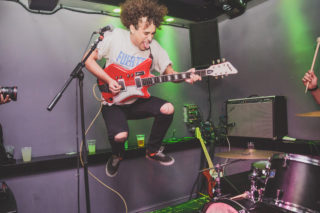 Methyl Ethyl, on the other hand, left me cold. Maybe it was the sound – on record they’re fine. For some reason beyond my comprehension, it all went a bit anaemic during their set, which left the digital delay feedback thin rather than immersive. Perhaps it was the wifebeater vest.

Shame were not my thing either. Macho and bombastic, their singer acted like he was Jimmy Pursey and Henry Rollins’ lovechild on stage – but he took after Jimmy Pursey more and, if that situation was real, Rollins would be disappointed but remain supportive because he’s a good guy. People who like ostentatiously laddish music that maintains an element of punk posing might wish to catch them. They were rowdy and shouty, guitarists pointed fingers in the air as notes rang out, singers rocked PA speakers while soundmen winced and so on. You get the gist: sweaty boys with faux anger and rockstar poses. 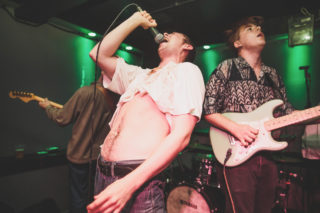 Finally, Charlotte Cannon deserves a mention. She is a solo singer with a synth who’s voice crackles like she’s singing through a broken ribbon mic and tries to fools us all into thinking that she’s unhinged – there is a little of Bowie’s knowing actorly smile. Her songs were strange and she had an amusing habit of staring down the people in the first row of the crowd. 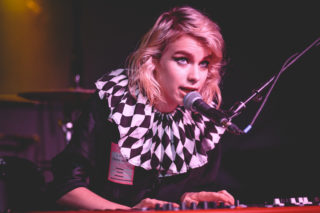