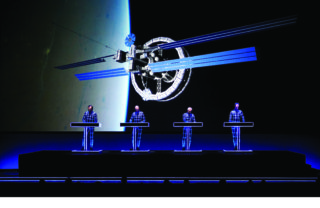 Locked in a feeling of futurism

A staggering 43 years since the German electro gods started the ignition on ‘Autobahn’ and went hurtling into the future, and they are still performing, albeit with just one original member, Ralf Hutter, left in the line-up.

It’s been 14 years since they last released any new material, yet the 3-D show, which they have now been touring for some years, feels anything but an exercise in nostalgia or even a prolonged victory lap. The infinite crispness and dynamism of the music, along with the ceaseless desire to purify the sounds of their electronics with ongoing technological advancements, means that these shows still feel progressive, advancing and blindingly fresh.

It’s of course testament to their impeccable back catalogue and their wider impact on the music world that this music still sounds so punchy and accessible, but what’s most astonishing is how locked into a feeling of futurism they still are. The three-part take of ‘Tour De France’ unravels at almost punishing volume levels and the bite and pounce of the beat hits as hard as any contemporary techno track does. ‘Computer Love’ soars like the glorious piece of symphony-like pop it is; ‘The Man-Machine’ sounds crunchy and fierce whilst ‘Neon Lights’ has an almost poignant melancholy to it, its infectious melody and slowed down, slightly wonky pace and beautifully simplistic lyrics giving space for reflection.

It’s that reflection that gravitates towards the grim realisation that these wonderful, pioneering, German creations that emanate from the stage will no longer be linked to our country in the same way in the near future. As is customary, they bring out their robots for the encore of ‘The Robots’ as the rather pleasingly antiquated robot dolls – as is the style for much of their visuals too – move in jolting fashion back and forth in red shirts and black ties. The humans return for one last finale, ending in a thumping closing trio of ‘Boing Boom Tschak’, ‘Techno Pop’ and ‘Music Non Stop’ before disappearing one at time, leaving the echo of some of the greatest music ever created ringing loudly in your ears, with the sad irony that soon we’ll all have a little less Kraftwerk in us.