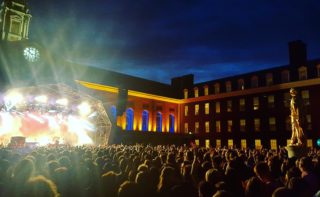 “Could this feel any more English?” ponders Belle And Sebastian’s Stuart Murdoch, surveying the scene in front of him after this evening’s opening song. He has a point: tonight, the Royal Hospital Chelsea – a working retirement home for army vets – cuts a very specific figure of, if not England, then the English establishment at least, with the sun setting over a commanding gold statue of Charles II, restorer of the monarchy, Chelsea pensioners in their scarlet uniforms dotted around the audience, and lashings of Pimm’s for all. A faint whiff of corporate jolly wafts over the site, too, and less than 50 yards from the stage is Margaret Thatcher’s grave (although, alas, no dancing on it – figurative or literal – is possible).

But for all Murdoch’s implication of being a fish out of water here, surroundings as conservative as these are where his band’s gently subversive music feels at its most insurgent: at least three songs tonight directly address characters experimenting with their sexual orientation (one of which is even introduced by a Chelsea pensioner), a further two extol the joys of wasting time on buses in the middle of the week, and the lyrics to ‘Stay Loose’ are slyly adapted to become topically Tory baiting. As Murdoch sings them, his face bears the kind of mischievously satisfied expression that’s enjoying an away win.

Not that tonight’s set is designed with revolutionary rabble rousing in mind – after all, given that this is a Belle And Sebastian gig, infectiously melodic jangling pop goodness is the insurrection method of choice. And after a rather shaky start, that’s broadly what’s delivered: the mariachi trumpet of ‘Dog On Wheels’ sounds even more wistful at dusk, ‘Women’s Realm’’s reveries of bygone urban summers are lent added poignancy in the West London night, and ‘The Boy With The Arab Strap’, tonight delivered with added balloon drop, once again reasserts itself as one of the most perfectly bulletproof bits of songwriting of the past 20 years.

The band encore first with a rousing rendition of ‘Lazy Line Painter Jane’, Stina Tweeddale of support act Honeyblood providing the female vocals with convincing charisma, and then with ‘The State I Am In’, both songs delivered nostalgically but note-perfect in a further confirmation of Belle And Sebastian’s ever-growing status as a heritage act.

But in an evening where Belle And Sebastian’s lyrics acquire an unexpected heft, it’s the final words of the main set’s closer, ‘Get Me Away From Here I’m Dying’ that cuts sharpest. “Said the hero in the story, ‘It is mightier than swords. I could kill you sure, but I could only make you cry with these words’”, sings Murdoch to a few thousand fans of quietly literate lyricism. Meanwhile, from the open windows of the flats surrounding the courtyard, retired military heroes watch on.