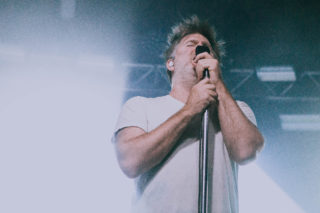 When James Murphy announced the full time return of LCD Soundsystem last year, eyebrows were raised. Few doubted he was still capable of creating great work, but the band had finished with a sense of perfection: that unimpeachable three album run, climaxing with an epic farewell hometown show at Madison Square Garden, immortalised in the film Shut Up and Play the Hits. Surely to add another chapter could only weaken the legacy?

One listen to new album ‘American Dream’ condemns that idea for good. Tonight, as the band arrive on stage at the home of Manchester’s Warehouse Project, they are both the same as they ever were and a brand new rejuvenation. Murphy prowls the stage, that old familiar pose, wisecracking and world-weary in equal measure, lyrics cascading out of him, seemingly beyond his control. The cauldron of fury, introspection and desire is still churning inside of him, and with a six year hiatus behind him, he has a lot he needs to share.

The new songs are charged with the tension of the band’s prolonged absence, as if a spring had been coiled inside them on that day in 2011, and it was only a matter of time before it burst back into life. Only three of the new tracks get an outing this evening, but they are treated with as much love as their older counterparts by the rabid, feverish Warehouse crowd. ‘Call the Police’ and particularly ‘Tonite’ are emerging classics, delivered with extra spice by the band, who, whether they’d admit it or not, must be overjoyed to prove that they are anything but a nostalgia act.

That said, their instinct to please the crowd overrides their determination to play the new material, and we are treated to four tracks from each of the first three records. Energy levels regularly reach thunderous levels – the sound of the trains passing through Piccadilly Station above the venue easily drowned out. ‘Get Innocuous’ and ‘Tribulations’ have the crowd flowing forward. By the time the encore arrives with third new song ‘Emotional Haircut’ alongside ‘Dance Yrself Clean’ and the immortal ‘All My Friends’, tears are gushing and lungs are bursting. The original setlist included a fourth encore track, ‘I Used To’, perhaps the standout track on the new album, but with the two-hour slot already up, it is sadly sacrificed. Not that anybody feels short-changed.

During the band’s original run, they defined the coming of age experience for a generation, but many of those in attendance tonight would have been too young to catch them before the split. If this show proves anything, it’s that even in their absence, the band continued to reach new fans. Think of this, then, not as a comeback but as a renewal. If they sincerely needed the break due to burnout, then it was worthwhile, because the 2017 version of LCD Soundsystem has them looking visibly rejuvenated and sounding better than ever. 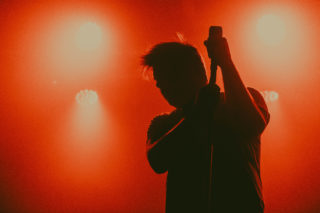 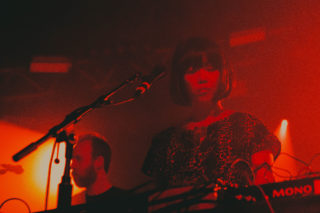