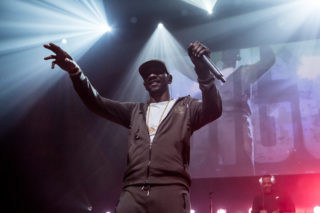 Monday nights at the Southbank Centre aren't usually like this

Someone’s smoking weed in the Royal Festival Hall. Next week Mahler’s Symphony No. 2 we’ll be performed here, but right now someone is smoking weed, people are dancing on chairs and the DJ just reloaded ‘3 Wheel-ups’ because Giggs has turned the place into a festival tent.

Meltdown Festival is an annual event at the Southbank, curated each year by a different artist. Previous iterations have been organised by Massive Attack, David Bowie and Yoko Ono, and the Meltdown 2017 is in the hands of MIA, who appears to be using the opportunity to bring outsiders and the unexpected to the fore.

Young Fathers kicked off proceedings last Friday, Julian Assange appeared via video link over the weekend and Yung Lean, Young M.A., Mykki Blanco and Princess Nokia are all to come. This is also why on a June Monday evening, Giggs, a rapper who for years was banned from performing in London and had tours cancelled by the police, was preparing to take to the stage in one of the UK’s centres of high culture.

Lisa Mercedes started the night, never letting her energy dip despite the many empty seats. Tracks like ‘Badness’ and ‘Back It Up’, plus a cameo from frequent collaborator Stylo G, showed why she’s so hotly tipped as she engaged the crowd with an undeniable charisma. Her dancehall choreography was also electric. I doubt The Royal Festival Hall has ever seen moves like that and it’ll likely be a long time before it sees them again. 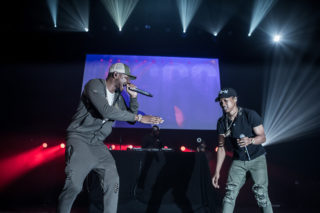 Rude Kid followed with a set of technical excellence and crowd pleasing hits, moving seamlessly between grime, UK rap and US trap. The crowd cheering and screaming the hook of XO TOUR LIF3 (“I don’t really care if I die”) in a theatre space was another incredible juxtaposition. A2 then showed his potential with a set that deftly switched between reflection (‘Hologram’) and energy (‘X2 DBLE’), whilst Nadia Rose has no right to have the stagecraft and hits (‘Sqwod’, ‘Tight Up’ and ‘Crank It’) she does for an artist in such an early stage of her career.

Towards the end of Nadia Rose’s set the crowd started to get up, tentatively testing the boundaries of what was acceptable in the hall. In Giggs’ DJ’s warm up set it was pushed further. J Hus’ ‘Did You See’ was wheeled as bodies filled the aisles. The clock crept closer to 10pm and it actually felt like a festival; boozy, buzzing and with a hint of anxiety.

Giggs took the stage with the confidence of a man who knows he’s got dangerous songs in his locker. He walked casually on as the first bars of ‘The Blow Back’ rang out, gradually upping the ante until the whole Royal Festival Hall was yelling the hook; “gang, gang, gang, gang.” Giggs put hearts in mouths when he said he was bringing out his “brother from Toronto… no, not that one,” but the performance of new single ‘Sexy’ with Pressa still kept the vibe going.

From here ‘3 Wheel-ups’, along with ‘Man Don’t Care’ and ‘KMT’, showed Giggs could do a features show better most people’s albums, and that the barrier was well and truly broken. People poured down the stairs, danced in the aisles and climbed on seats. ‘Lock Doh’ and the Giggs’ classics ‘Look What the Cat Dragged In’ and ‘Talking Da Hardest’ (of course the national anthem had to be played in The Royal Festival Hall) had people skanking before chaos resumed for the finale of ‘Whippin’ Excursion’. 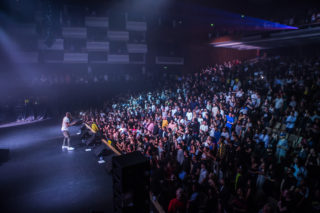 What was special about Giggs performance was there was no question over whether he deserved to be there. There was no acquiescence to the room. No suggestion that the music needed to be altered to fit in. Rap and grime have been performed in similar places with orchestral accompaniment, such as Kanye West’s ‘Late Orchestration’ or The Radio 1Xtra Prom, but Giggs took the room, as he has throughout his career, by being unashamedly himself. He’d been blocked from playing clubs and had his career stalled by the powers that be for too long. He was in their house now and he was making it his own. The fact the crowd consumed the art in their own way, rowdy, loud and sweaty, and refused to be cowed by their surroundings was also a celebration.

It took grime and UK rap years to be accepted and respected by the mainstream. Years of being told it would never work, years of being accused it promoted violence and years of being forced into making it pop and dance tracks. Now the genres have finally broken down the door. They’re on the radio, topping the charts and headlining festivals. They’re in the Royal Festival Hall, and they’re not going to change.