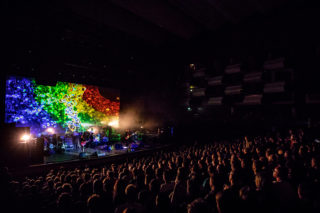 Five years since their last tour

Not unlike their recorded sound, the experience of seeing My Bloody Valentine live is a cumulative one; although there are individual moments of particularly acute brilliance – ‘You Made Me Realise’, ‘Only Shallow’, ‘Come in Alone’, the other usual suspects – those instances seem slightly beside the point. This is an overwhelming, singular experience, a pulsating, organic whole, not simply a sequence of rock songs.

Having returned to the live arena for their first shows since the tour for their Great Comeback Album, ‘m b v’, Kevin Shields and co positively submerge the Royal Festival Hall from the outset tonight; few in the room are able to keep their heads above the waves of glorious noise, and fewer still are complaining. The genteel pre-set atmosphere is abandoned gleefully as the gorgeous, gargantuan projections behind the band illuminate the shafts of feedback and snatches of melody that emerge from the seethe of Shields’ customary wall of amplifiers. 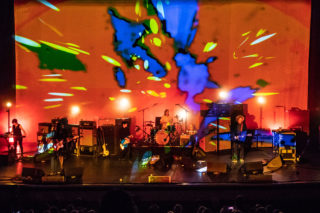 It’s not a technically flawless set, perhaps betraying a little rust on this venerable machine. There’s more than one false start, the occasional fluffed drum hit, and one admirably candid admission from Shields that he “couldn’t remember” his guitar line. Again though, in the context of the set’s overall effect, such missteps hardly matter. I wasn’t alive when this band were at their supposed creative height; what’s amazing is how utterly cutting-edge they still sound, which is perhaps simultaneously a testament to Shields’ genius, and a sad indictment of the relative conservatism of much mainstream guitar music in the period since the turn of the millennium.

If the BBC Radiophonic Workshop provided a “fanfare for a future that never arrived” in the 1960s, MBV continue to soundtrack an infinite utopia that still feels, during tonight’s set, optimistically possible. Three decades into their career, and five years since their last tour, My Bloody Valentine remain genuinely transcendent. 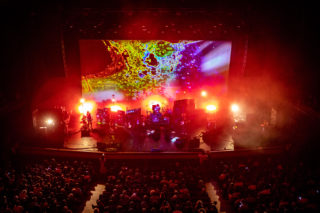