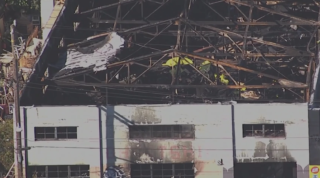 It’s now been confirmed that 36 people have died following the fire last Friday at the Ghost Ship live-work DIY space in Oakland, California. The authorities expect the number to rise. The friends and relatives of those unaccounted for have been asked to find dirty clothes and used combs to provide DNA to match with remains. A “significant” amount of people remain missing.

A DJ was playing to around 50 people at an unlicensed party when smoke began to fill the building. Three of the staircases, on which people tried to run from the fire, were irregularly-shaped, home-made from wooden pallets. As people were trying to escape the lights failed and loud cracks were heard as wood splintered. The stories that are emerging from survivors are horrific.

The leaseholder of the warehouse, Derick Almena, has apologised. On NBC’s breakfast news, before cutting the interview short, he explained how he had set up the space with good intentions. The Ghost Ship provided a space for marginalised people, performance arts and alternative arts. He explained that it had become a home as well as a hub of activism and performance space. People moved in because they couldn’t pay their rent while, at the same time, living lives as artists and activists. DIY spaces give people an opportunity to help each other change society and create art within an unfriendly economic context – neoliberalism.

The fire has put DIY spaces in the news and they are facing scrutiny from a number of authorities – one DIY space, in Baltimore, has been shut. However, the problems at Ghost Ship should not put people off from starting and attending these places, it should instead provide a lesson – one that is much needed. I have lived in a live-work warehouse, just like Ghost Ship, and I am part of a collective who are opening a DIY space in Manchester called Partisan. When I heard that there was a fire in a DIY space in Oakland I felt a lot of sympathy, a knot in the bottom of my stomach – more nausea than sadness, if I’m honest. I saw the pictures, then read some coverage and they confirmed some of my fears – now the resigned sadness is moving in probably to be replaced, by the time I have finished writing, with anger and frustration.

Considering the community that has come together to create Partisan, I can only imagine what the people involved in Ghost Ship are going through. Partisan met for the first time in January, some people were already friends but I was a stranger who had recently moved back to Manchester after nearly a decade in London. Perhaps it was a pipedream, but one of the reasons that I had moved back to Manchester was to do something like this. Then there it was, two weeks after moving into a house in Salford: a flyer advertising a group who wanted to create a place for music, culture and politics in spite of austere neo-liberalism’s attack on individuals and communities. From the first few meetings it became apparent that Partisan was going to be great. They people involved love music and the arts, are funny and kind, and wanted to get their hands dirty to change things. Even before we have built (rented, perhaps) our first permanent space, there have been a number of new and unruly meetings of different musicians, artists and activists.

I now count the people I have met through Partisan, foremost, as friends. There’s a certain strength to that – when people who like each other want to do something, they tend to have each other’s backs and do it. That’s a model for social change. On a personal level it re-empowered me, giving me something that I had lost living in London. I can’t thank them enough for giving me a second chance at using music and the arts constructively and getting back into active politics (also for letting me play gigs with them, basketball[!], have pints and listen to my various shades of complete crap/share their typically more perceptive views on things).

My experience of Partisan is not unusual. Coming together to do something, not just sit and passively absorb the world (or the mediated world) around you, with other people matches actions to people’s words. It gives you a deeper understanding of them, tolerance of their idiosyncrasies and knowledge of their potential for good. Above all, it builds trust. In Oakland, if a community like ours has been lost, the survivors must being going through hell. I, and despite being reticent to say we, I think that other people in collective would not mind in this instance, send our best wishes to them. You can rebuild it stronger, safer and continue to provide your alternative vision of what society might and should be.

I’m not going to compose an entirely idyllic view of DIY spaces and live-work warehouses though. Partisan will be inclusive, accessible and safe for all. From the outset we have considered how to make the space accessible to disabled people, for instance. We have talked to experts and listened to their advice. We have factored in the cost of accessibility and other public safety measures within our fundraising targets. We understand the politics of space and how spaces can be altered to include the broadest range of people possible.

People should set up DIY spaces and open up live-work warehouses for communal events, but they need to be acutely aware of the risks and responsibilities. The reports coming from Oakland state a number of fire code violations, insufficient rubbish disposal, smoking in packed places, prefabricated warren-like wooden hallways. I am reticent to judge whether these claims are credible or not without more evidence. This type of talk has provided a stick for authorities to beat music cultures and those who seek alternative lifestyles for years. It pits danger, dirtiness and disorder against binary-opposed modern ideals of safety, cleanliness and order. Health and safety controls, yes, of course, but also prevents people who think that life is cheap from taking liberties.

We should make do, build structures that reflect our means and imaginations, but not without a duty of care for those around us. If DIY spaces are to offer a radical alternative we need to keep each other safe. This was not what I saw in the London warehouses I lived in (others may be different): packed parties (maybe 250 people) with one single door to escape through if a fire had happened, tinder-box prefab rooms made of MDF and insulated with pillows, elaborate but precarious wooden constructions made by people with no training, filled with rubbish and cigarette smoke.

These transgressions were not carried out spitefully. The construction of these spaces and the happenings inside them often showed great ingenuity and creativity. The packed parties with one exit were fun at the time, absolute sweatboxes with great music. The people who turn a blind eye to the consequences of these dangerous situations (me included, by saying nothing I was tacitly complicit) are most often misguided and a victim of consequence. The people who think that life is cheap are landlords and politicians rather than residents of and those who run DIY spaces. Neoliberal economics have impacted upon our housing – which should be a social right rather than an economic privilege.  Unregulated rental markets, the lack of social housing, an economy (in Britain at least) propped up by artificially inflated house prices, have created and exacerbated a housing crisis.

A generation of people who are brave enough to take chances with art or live on the margins to work towards positive social changes, but find little financial reward, are having to find other ways of living. One tactic is communal living. Another is creating spaces for the community that are both a haven from the situation outside and provide somewhere for a challenge to that situation to take shape. In light of the necessity of these spaces within the current social, economic and cultural context, it is imperative that these homes, workplaces and social spaces are safe. Your landlords and the politicians currently in power do not care about you. As a consequence, you have to ensure your personal safety and your community’s safety.