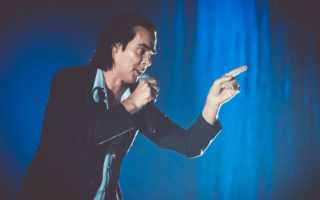 Some bands demand to be seen in the largest space available, such is their ever-expandable, supersized sound. One of those bands, however, isn’t Nick Cave And The Bad Seeds. The pairing of them with the O2 Arena, then, is a rather daunting prospect: a venue more accustomed to welcoming high-kicking pop acts seems ill-suited to a group that have made a 30-year career out of the kind of visceral gothic storytelling where it works best to see the whites of their eyes.

With that in mind, Cave’s performance tonight, in which he contrives to shrink the O2 into the smallest venue imaginable, conjuring intimacy and intensity from this vast space, resembles an act of sorcery, as impressive and compelling as it is unexpected. He spends virtually the entire gig propped up on the barrier, leaning on the front row for support, and frequently dives right into the crowd. He appears to sing every line directly to an audience member (“Can you feel my heart beat?” he asks one attendee during ‘Higgs Boson Blues’, before placing her hand on his chest and declaring in guttural, almost death metal tones, “Boom boom boom!”), and that personal connection filters back through the venue like a contagion.

But it’s not just Cave who projects to row Z this evening – The Bad Seeds, too, have reshaped their performance style for the space. Accordingly, there is from time to time a din as ferocious as any stadium rock band that would normally grace this stage (the retooling of the final third of ‘Jubilee Street’ from serpentine slink to hard, driving punk is astonishing), and elsewhere, Cave’s band provide the sort of restraint and populist melody that works so well in halls this big: when Warren Ellis appends a swooping, poignant fiddle solo to the end of ‘Distant Sky’, while a close-up of him is beamed up onto the 60-foot screen behind the stage, it makes for a gorgeously engulfing sense of communal, cathartic heartbreak. 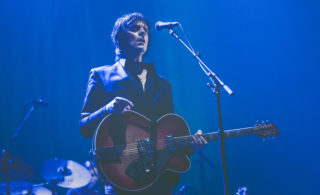 The level of intimacy is ramped up one notch further in the gig’s final moments, when Cave, going walkabout again, appears to bump into Primal Scream’s Bobby Gillespie in the VIP seats. They greet one another like it’s a chance encounter in their local, Cave inviting Gillespie to sing the final line of ‘Push The Sky Away’ as if handing round the karaoke mic.

There was a feeling before this week’s run of shows that Cave had decided to tour notoriously cold, distant arenas to spare him the obligation of interacting with his public too intensely while singing darkly personal songs about his son’s death. That the setlist contains all bar one of ‘Skeleton Tree’’s songs, and that Cave has never drawn so deeply from his audience’s ardour for him as he did tonight, suggests his mission was almost the reverse.

Some bands work best in the largest space available. Turns out Nick Cave and the Bad Seeds is one of those bands after all, but on account not of their ever-expandable music, but of Cave’s magnetic, infectious and irresistible charisma. A sense of awe rings around the O2 as the Bad Seeds leave the stage, lifetime Cave fans shocked at quite how magnificently the band have mutated. Now that the genie’s out the bottle, one wonders how they can ever go back.