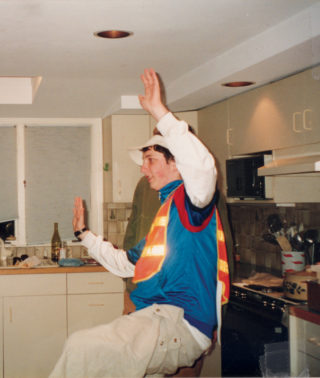 He spent it making mixtapes and falling for Quentin Tarantino

Daniel Lopatin: In 1998 I was living in a suburb of Boston with my parents in a white range, L-shaped ranch house, a mile away from the high school that I walked to everyday. Wayland, Massachusetts, was a rural suburb that had no real sidewalks to walk on, just bike paths.

We moved there when I was 12 from Winthrop, which was a dreamy little town by the airport in Boston. If you were brave enough you could swim to the airport. I always missed that dreamy town, but by 16 I had my friends and we were all getting our licenses. We were all interested in getting inebriated for the first time and I remember we were in the basement of my friend Jay’s house and he had this 24-pack of Red Dog beer, which had gone extinct. It was skunky already, but I guess I was trying to impress people so I was like, ‘nah, I’ll drink this,’ and I got super sick instantly, and from that day on they called me Red Dog.

We’d make mixtapes and listen to them in the car, drink and smoke weed. I only ever drove Toyota Camrys my whole adolescence, and my first one at 16 was an ’88 Camry that was a weird champagne gold on the outside and maroon upholstery. We’d go into Boston, which was 20 miles away, to buy records. The closest thing you could get to a record store where I lived was you’d have to go two towns over where there were strip malls and there was a chain of record stores in New England called Newbury Comics. Everyone kind of hated it. Newbury was OK, but buying a CD at the mall was the worst experience so I used to make tapes off the radio all the time because there was such good college radio in Boston.

When I was 16 years old pretty much all I did was make these tapes. There was a show in the afternoon called ‘Tapedeck Tuesday’, which was ’80s Golden Era rap and hip-hop. I’d tape a lot of that and stuff like Wu-Tang and DJ Premier and Gang Starr. Then there was a reggae show on that I hated and I still to this day loathe reggae. I’d hang out and eat while the reggae show was on, and then it would be techno, and at that point in ’98 it was exclusively drum’n’bass and jungle – Dieselboy and other crap that I’d get spaced out to until 1 or 2 in the morning. The song from then that takes me back to that time whenever I hear it now is Roni Size, ‘Heroes’.

The summer being 16 I went to a film program at Boston university. I went out there for a month, and I let this girl dread my hair. And I had a girlfriend who was in the theatre program, and basically I was a really, really funny, creative kid who was obsessed with music and movies. That was all I wanted to do – write these screenplays, and I would obsess over Quentin Tarantino screenplays and I would read Natural Born Killers and True Romance over and over and over. I was so fucking obsessed with him, even my Hotmail password was Quentin. He just feels like a family member now – his new films might not be my favourite films now, but I have to see them and I have to know what he’s up to.

When I left school I strictly wanted to be a screenwriter – that was all I wanted to do. I felt so confident in the fact that that was what I was going to do. I couldn’t imagine it any other way – all my backup plans were cover stories so I could move to New York or whatever.

I was not good at dating at all, until I went to film school. That was the first time I felt like I was cool and that girls liked me. In my school, the kids in my town were so stupid! So dull and uninteresting that a kid like me who was alternative had few options. In the whole school there were two kids that were into hardcore and metal. Two! It was me and a couple of friends, and there’d be one or two girls that made sense and would hang out in our clique, but there was way too much competition. I didn’t have enough game to compete, and it wasn’t until I went to film camp where I really sowed my seeds. When I came back from film school I had all this confidence, and then I had some game with the ladies, because I had this laissez-faire attitude of, ‘well, I’m not impressed with you either.’ But I had a great year when I was 16. I was a happy kid, in spite of the homogenous study body I was faced with, and I think I was cooler then than I am now. I was definitely the kid that I’d want to hang out with now. I was the best.