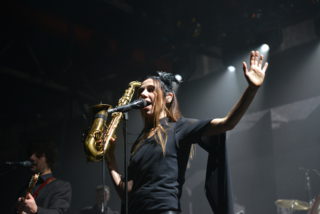 Polly Harvey delivers a captivating set at Manchester's Victoria Warehouse, despite some issues with the venue.

Here’s the thing about PJ Harvey – it’s not just that she eschews the idea of bending her creativity to fit any kind of commercial mould. It’s that, by now, she follows whatever theme it is that’s inspiring her at that present moment, with little consideration for how it might go over with critics or her fanbase.

The former’s fine; she’s enough of an institution by now to have long since turned the dial down on the analytical response to her music. The latter, though, is a different matter, and you can’t help but suspect that her following have been grappling awkwardly with her latest work, ‘The Hope Six Demolition Project’, ever since its April release.

When she put out ‘Let England Shake’ five years ago, there was a palpable sense that she’d nailed the concept she was going after; that album’s a withering treatise on England’s relationship with war that anybody packed into the Victoria Warehouse tonight would tell you is never more prescient, especially at this time of year.

This new LP, though, feels a touch muddled; she rails against poverty throughout on a global scale, from Kosovo to Washington D.C., but it all feels awfully spectatorial.

Accusations of voyeurism and poverty tourism are by no means far-fetched. It doesn’t feel like too much of a stretch to say that it’s highly unlikely that ‘The Hope Six Demolition Project’ will be looked back upon with the same fondness and reverence as ‘Let England Shake’.

After all, we’re presently living through some turmoil in the Western world, and ‘Hope Six…’ speaks to none of that, whereas ‘…Shake’ seemed to cut through the establishment’s case for perennial warfare like a hot knife through butter. 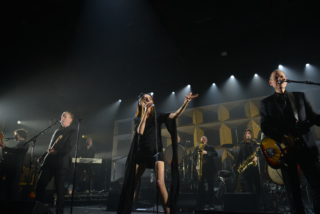 The upshot of all this is that Harvey was always going to have to pull out all the stops to have ‘Hope Six…’ convince on the live stage. Just as well that she does precisely that, then; as her ten-piece band glide into view to the ominous opening strains of ‘Chain of Keys’, it’s clear that she’s little interest in providing a stripped-back take on her recent work. After all, how often do you see no fewer than three saxophones on the same stage at a rock show?

On top of that, we’ve the likes of long-time collaborator John Parish and Queens of the Stone Age alumni Alain Johannes amid the fold, too, and everything just feels as if it’s in stereo; if these songs sound a touch flat on record, they’re bone-shaking here.

Sure, they don’t do anything to amplify or diminish the political slant of the songs, but the likes of ‘The Community of Hope’, ‘The Ministry of Defence’ and the frankly thunderous ‘The Wheel’ sound as if they’re being played for the first time in glorious technicolor – so much punch and so much verve.

Of course, anybody expecting a greatest hits affair might have been better advised to stay at home – we get nearly all of ‘Hope Six…’ and a good chunk of ‘Let England Shake’ as the set’s backbone – but anybody committed to the cause should know by now that crowd-pleasing has never been Harvey’s preserve – she’s near-mute tonight.

It’s worth mentioning, by the way, that the rooms her people have booked on this particular jaunt represent a head-scratcher. Tonight’s venue, the Victoria Warehouse, is a characterless hangar of a room that’s a pain in the arse to get through; think of a scaled-down Ally Pally, just for us up north. Add to that the fact the she played one night previous at a lesser hall within Glasgow’s much-maligned SECC complex and goes on to play a warehouse in Wolverhampton tomorrow that’s a new one on this veteran of giving tour schedules a once-over and you have to wonder what on god’s earth she, or her team, were thinking; it’s as if she’d picked illustrious cultural cities and specifically asked for the worst places to play in them.

As this review is being written, the Manchester Evening News have already picked up on potential overcrowding at tonight’s show; accusations that it was dangerously, health-and-safety-threateningly oversold are miles wide of the mark, but was this the best possible place that somebody of PJ Harvey’s stature was capable of booking locally?

All told, though, the key thing to remember is that Harvey doesn’t tour very often these days and, stupefying venue selections aside, it’s difficult to accuse of if failing to pull out all the stops. This is a terrifically talented band playing compositions that haven’t been forced to fit the mould here – they’ve been expanded to fit the group.

Material from ‘Hope Six…’, ‘White Chalk’ and ‘Let England Shake’ feels so rich that the throwback likes of ‘50ft Queenie’ and ‘To Bring You My Love’ feel a touch out of place at the end, but that’s fine. We’re supposed to be the ones straining to keep up with PJ Harvey, not the other way around. 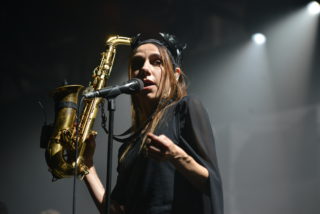