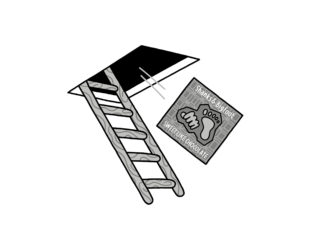 Words by Fergal Kinney Illustrations by Kate Prior

Fulfilment, wrote the poet Philip Larkin, is a ‘desolate attic’. Having your desires fully satisfied is never fully satisfying. Living as we do in the era of digital plenty, many of us have forgotten – many of have never known – analogue scarcity. A song heard on a radio; irretrievable, quicksilver until its next broadcast (will there be another broadcast?) or wrestled to the ground by physical purchase. David Bowie’s now famous 1999 prediction that music would become “like running water, or electricity” typifies a present where over 35 million tracks can be accessed instantly on streaming platforms that have become kingmakers in their own right. There are, however, taps that are still turned off; boxes in the desolate attic that remain sealed.

“We’ve all had that experience at a party where the wrong version of a song has come on, or a cheap cover version that’s the only one online,” Rob Johnson tells me. Johnson, a 35-year-old Londoner, set up the Twitter handle @Pop_Activism at the start of 2018, the Twitter handle a shop window for a project that aimed to plug the gaps in the digital surplus. What happens to the music deemed too shit for Spotify? The artists nobody remembered to remember to transfer online.

For Rob Johnson, things began when his friend – the trance pop star Jan Johnston, whose popularity was at its apex in the 1990s – was trying with little success to get her back catalogue onto streaming services. For artists who are out of the music industry it can be a highly complex process simply finding out who owns your work and art. Knowing that Johnson worked at a law firm and, crucially, was fanatical about ’90s pop music, she suspected he would be best equipped to help her out. She was right, and lit a spark that turned Johnson into an unlikely campaigner.

“Fortuitously, parts of it were owned by the big three – Sony, Warner and Universal – so I just rang up the main switchboards of each, asking if they owned this music and would they release it. After a few months the music came online. A few months later I was moving over all my old MP3 playlists from iTunes, and I just noticed how much music was missing. Why don’t I try asking those contacts I made putting this stuff up online?”

Once his Twitter account was set up, Johnson began publicly pressuring labels on social media whilst privately doing the hard graft of untangling a vast web of publishers, record labels and management. He realised that there were already thousands of like-minded individuals using social media to get their favourite pop hits onto streaming services; they just weren’t being heard, and the disparate movement lacked a focal point. “There’s a disconnect between people who want music online and those who can actually get stuff online,” he explains. “People are tweeting at Spotify or at record labels but the people monitoring their social media aren’t in a position to put that music online or even get the word through.” Johnson quickly became a figurehead, with people tweeting at him with requests for him to campaign for.

Successes came early, but it would be July 2018 when Johnson claimed his most prized scalp – the first number 1 single that he was able to digitally secure, Shanks and Bigfoot’s defining work ‘Sweet Like Chocolate’. It was the 8th biggest selling single of 1999; I was six years’ old when this was released and remember watching its animated video, singing its playground-ready chorus hook. “The rights had reverted to Shanks and Bigfoot themselves,” says Johnson, “but they had long since retired from the music industry. It took months of trying. Other challenges can be that the rightsholders don’t actually have the audio – where they’ve acquired these off someone who’s been shoddy with the archive – so I’ve done a lot of frantically getting tracks off CDs.”

How has the music industry responded to Johnson’s unlikely activism? “The response from labels has been…varied. The main three are on board – they get it and think it’s a good thing. Some of the independents are smaller and more agile and can get stuff on quickly, they’re quite keen. Some international labels I do have problems with – the US don’t seem to take kindly to a member of the public contacting people there, which can be quite frustrating. You would think they’d be keen to monetise the assets that they’ve got.”

Though taking sabbatical from his activism to spend a few months travelling, Johnson is already hatching plans for his return. There are still prizes in sight. The 2001 Mariah Carey soundtrack to the film ‘Glitter’ is one (it was released on September 11th; the world had other priorities). Another is Dana International’s 1998 Eurovision winner, ‘Diva’. For Johnson, there’s a romantic attachment to these forgotten pop figures, as well as some level of nostalgia. “There is a sadness about pop acts from years gone by and just how disposable the whole thing was many years ago – if a first or second single didn’t go top ten then the album would get shelved despite all the work that goes into it. The LBGT community in particular love the fallen diva, or the flopped boy band, and there’s a frustration that people still have about these bodies of work that just aren’t put out there, sitting gathering dust in a record label vault. This stuff could be cherished by people if only it was out there. For artists, it makes you feel like you’ve brought some closure to artists in getting their work back out there.” 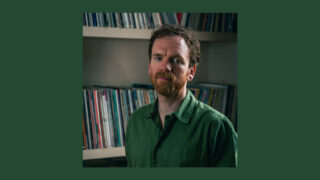 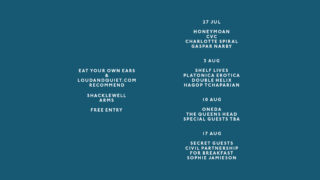 Our free gig series at the Shacklewell Arms with EYOE returns