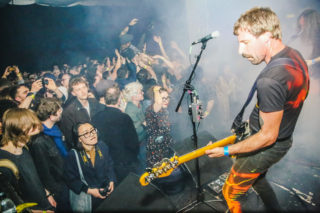 Words by Loud And Quiet Photos by Luis Kramer

Describing itself as “a platform which aims to inspire those entering the music industry by sharing stories, experiences and practical advice from within its numerous fields”, Route was founded by Jamal Guthrie and Georgia Hardy, of LNZRT and Spilt Milk respectively. At a time when many of us are reevaluating how the creative industries work and how accessible they are to people of all backgrounds, L&Q spoke to Guthrie to find out more about the project.

How did Route start? Was there a particular moment when you thought this was something you should do, or was it a gradual process?

Route began as a side project, and it had a few different things going on before it became the site it is now. I guess a pivotal point for me was when I became responsible for new starters at my main job and was able to pass on knowledge that came instinctively to me because I had been doing it for so long and knew the score. Often it’s hard to know how much you’ve learnt until someone asks you, and it was only really two or three years ago when I realised I was someone with valid experience to share. In my circle, the knowledge I took for granted was information that could make the industry easier and more accessible for others, and that’s the basis of what Route has become, leaving the ladder down so to speak.

What’s the ethos behind Route, and how have your own experiences in the music industry fed into that?

One of the main things we want to do is ensure the current generation of young people entering work are more equipped to face the challenges this industry can throw at you than we were. I’ve been working in music in some capacity for 9-10 years now – and Georgia around 5 – and in our experience there’s very little training. People are expected to learn on the job and while some people can thrive in that sort of environment, it can also be really intimidating for some employees and ultimately detrimental for the employer.

Another is playing a key part in diversifying the types of people who are applying for jobs in the first place. We know from our own experience that socioeconomic, race, class and gender factors play a big part and the recent Youth Music report, A Blueprint for the Future, backs that up with hard evidence. No one likes to admit it but the music industry is elitist, like most arts based industries. We want to create and share opportunities for young people from different backgrounds who feel excluded or who may not have considered music as a career path because they don’t know the range of roles out there for them.

How does managing Route work alongside your other projects?

I co-run LNZRT. We look after the programming, marketing and production for MOTH CLUB, The Shacklewell Arms, The Waiting Room and we were also due to launch Wide Awake festival this year. Georgia used to work at LNZRT, which is how we met. She now runs the diaries for The Old Blue Last and Sebright Arms as well as her own promotions company Spilt Milk. I’ve been doing bits and pieces to get Route started alongside that for a couple of years but in the last year we’ve been able to dedicate more time to it. Through our regular jobs we get to work with promoters, photographers, agents, record label bosses, sound engineers, journalists, PRs and all sorts of people with other interesting jobs in the industry and those are the kinds of people we talk to through Route. 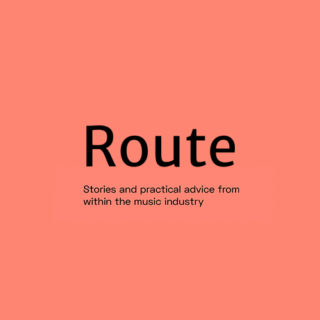 From your perspective, what does the music industry need to do first to begin to make the structural changes many have acknowledged are long overdue at this point?

We have to be realistic, people in positions of power aren’t going to start leaving their jobs to make way for a more diverse group just because that might sound like a nice thing to do, but what they can do is leave the door open for others to make their own way and start creating their own institutions. It’s about sharing knowledge and changing the general ethos around the music industry being this cool club where you have to know the right people to get in and be accepted. Structures also need to be put in place so that there is more secure and legitimised work available. Currently around 72% of workers in the music industry are freelance, and for those starting out it can be a daunting prospect to not know whether your work will provide economic security.

How do you intend to keep Route growing and making a positive difference in 2020, considering the state of flux the music industry is in?

I think the industry will adapt and survive. I don’t know what we’ll be coming back to but there will always be an appetite for music consumption and there will need to be an industry of people working to service that. For the rest of the year we’re going to keep on sharing knowledge from people at various stages of their careers on the site and (COVID withstanding) bring that into a physical setting with workshops, panels and other events. We are also looking into different ways we can help to give young people practical work experience through funding and more hands-on initiatives.