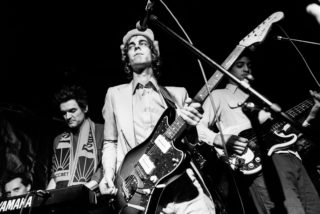 The Windmill in Brixton is like a pirate’s ship – crooked, creaking, with layers of dust encrusted paint, flaking away. Much like a wrinkled, creviced smile, it hails tales of plenty – each flake, a story better than the last. You can only imagine how it’ll look in the morning – but, for now, this place is no shipwreck.

Tonight is another debut. It’s their first UK performance.

It begins, slightly delayed with Saul sifting about, looking for keys. “Where is it?! Someone’s nicked my keyboard,” he wails at the band. Stepping over to the mic, he then addresses the crowd: “Jacob from Ormesby, I need to borrow your guitar. Please come forward…”. Right then, good. That’s one box ticked already, anyway. Ramshackle? Certainly. 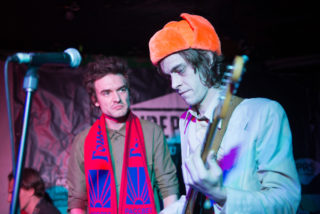 With the crowd all shook and the band set up, the stage hosts two keyboards, a vibraphone, one saxophone, one guitar, a bass, a drum kit and synths. Additionally, eight band members. Slithery and slow at first, their set slinks about in pace. Saul masters capsized cries, often slipping beautifully out of tune. It’s sincere, playful and, at times, splenetic.

Checking into the second hit of the night, it’s ‘I Wanna Dance With My Baby‘. A little like Bowie’s ‘Modern Love‘, it’s an upbeat soulful medley of whiney guitars, snapped together with Jonathon Richman “alrights.” Their influences are worn transparently as the set flits from Beatles to The Fall. Throughout, they look totally absorbed, the eight-piece rarely looking beyond their own instruments.

But it’s their last track that has us twisted all the way sideways. Guitars screech like Sabbath, keyboards sound drunk, primitive “heys” get shouted around the gargled lyrics. In come maracas, as Saul Adamczewski waoowls. Unified, Insecure Men are the kids causing havoc in your school’s unattended music room, caged by rule-book hyperventilation, gnawing themselves free.