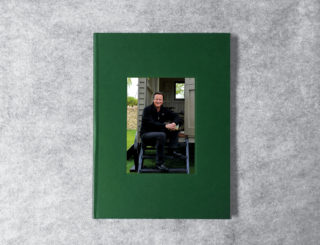 What to do once you've left your country in ruins

“Rat-a-tat-tat,” Samantha said as she simultaneously knocked on the shed door. “David, the gentleman from the BBC is here for the story about Margaret.”

David popped out his little red face. “Splendid. Show him through. Oh, and darling, maybe while this hack is around we should refer to Margaret as ‘the shed’ or ‘the gypsy caravan’. You know how wicked the BBC can be.”

“As you wish, darling. A little porky pie between us,” she winked.

Samantha nodded and mimed buttoning her lip shut. She left and returned with a reporter named Martin. “I’ll leave you boys to the ‘man cave’,” she said. “There are a couple of Blue Riband chocolate biscuits in the draw.” She winked again. David rolled his eyes. “Sorry about that, mate. Thanks for coming. So, yeah, this my new shed. Or gypsy caravan, if you prefer.”

“It’s lovely,” said Martin. “Your wife said you’ve called it Margaret?” David was clearly fuming. “Ha, really?” he said, pulling his face into a crooked smile. “Just a little joke, that. Haha. Quite funny, but probably not worth mentioning in your piece… Let’s go in.”

Inside David flumped down into one of those collapsible green camping chairs that parents take to Glastonbury. “Kick back,” he said. “I’ll put some tunes on. What do you fancy?”

“Well, I guess we’re not allowed to listen to The Smiths,” quipped Martin. David pretended not to hear him.

“Ed Sheeran is so crap, isn’t he?” said David. “I know, let’s go for The xx.” David closed his eyes to the sound of ‘Intro’ for what felt like longer than the track lasts. “So this is where I get away from it all.” he said.

“It’s a really nice shed,” said Martin. “Do you mind if I ask how much it cost?”

“Do you mind?” winked David.

“Errr, no?” said Martin, although he wasn’t really sure what he was meant to say to that.

“No, it’s not about how much my shed cost,” David assured him, “it’s about what I plan to do in my shed. Do you want a beer?”

“Well, plenty of this,” he said, cheersing Martin’s bottle of Peroni. “And I’m going to write a book, about my time at number 10.”

“Oh, brilliant,” said Martin. “You could called it ‘I Was Looking for a Job and Then I Found a Job’.”

“You know, because you’re a Smiths fan… The line from ‘Heaven Knows I’m Miserable Now’.”

“Yeah. I think ‘This Charming Man’ is good though.”

“Oh yeah, but come on, ‘This Charming Man’ is clearly their best song.”

“‘Last Night I Dreamt That Somebody Loved Me’.”

“Or how about ‘I Started Something I Couldn’t Finish’?”

“HEY!” snapped David. “That’s enough!” The atmosphere in Margaret plummeted. Martin sipped his beer. “So,” he finally said to make peace, “I bet your mates like hanging out here.”

“Oh, Christ yeah,” said David. “George was over just yesterday. He’s always around. My wife calls us Ant & Dec. (I’m Dec.) He’s around so much we joke about how he ever gets any work done.”

“At The Evening Standard, you mean? Or at all of his other jobs?”

“Errrr, yeah…” David was thinking. “Oh, hang on, it couldn’t have been yesterday George was here. Come to think of it, it must have been at least a month since I saw him last. Damn shame really, but he works so hard… Jeremy loves it too, of course, because it’s got wheels, although I won’t tell you the joke he makes every time someone refers to it as a gypsy caravan… And that’s me, really. Just out here enjoying a modest, quiet life with the few pounds I was fortunate enough to squirrel away.”

Samantha came down from the big house with a tray of tea. “It’s a lovely shed,” said Martin.