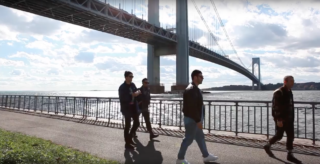 Back home in Brooklyn The So So Glos are well known in the community – having built their own venue (Shea Stadium), co-founded another (The Market Hotel), released a number of albums and generally lived a full and committed life to rock ‘n’ roll.

It’s rare that they make it to Europe, but this week they’re taking their latest LP ‘Kamikaze’ out on the road. They’ve dubbed it the Brexit From The USA Tour so respect to them for that.

In November they recorded this recent short film with photographer and filmmaker Guy Eppel. It follows the band on a typical show day – from their local cafe to one of their DIY shows.

Eppel explains a bit more about the film:

“The band took me down to their old stomping ground of Bay Ridge (of Saturday Night Fever fame) and took in the sights ‘n’ sounds. They showed me around some of the spots that had influenced the feeling behind their sound and its direction.

“After that trip down memory lane we drove back to reality in North Brooklyn arriving at Shea Stadium. It’s now an established DIY music scene venue that hosts 7 nights a week almost 365 days a year. As well as being a place for kids to jam out, people to create or just dance at, it’s a vital part of the community.”

Watch it exclusively below:

Having already stopped in Glasgow, here’s where you’ll find The So So Glos playing this week:

The So So Glos