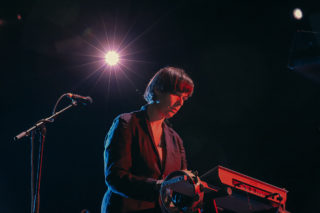 An hour of their most-loved songs, performed with grace and steely intent

If there’s one throughline to Primavera Sound – a festival seemingly incapable of sitting still, with its latest innovation being an expansion to LA in 2020 – it’s that it loves to be the place for reuniting bands to make their comeback: Pulp returned after 10 years away in 2011, The Avalanches broke their 15-year hiatus in 2016, and next year, Pavement will re-reanimate at the festival for their second reunion of the 21st century.

Keeping the tradition alive this year is Stereolab, who (after a couple of low-key warm-up shows in Ramsgate last week) played their first proper gig in a decade in the grand brutalist amphitheatre overlooking the sea last night.

Occasions like this are less about the kind of artistic or creative exploration frequently seen elsewhere across the Primavera weekend, and more events for the loyal superfans to return to worship and celebrate. Accordingly, while Stereolab’s exotica and kosmische musik underneath Marxist lyrics isn’t exactly the stuff of beery singalongs, the band still understand their purpose tonight: they provide an hour of their most-loved songs, although performed with grace and steely intent that nonetheless suggests, after a slightly tentative opening, that this is not just a nostalgia junket for them.

Indeed, there’s a sense that a band who spent the decadent 90s critiquing capitalism and cultivating an aesthetic of pan-European collaboration from the position of a sceptical observer might just, twenty years later, still have something to say: when Laetitia Sadier introduces ‘Ping Pong’ as “a very nice song about the disasters of capitalism”, the spirit seems far more contemporary than most 25-year-old songs played at 2am at a festival. 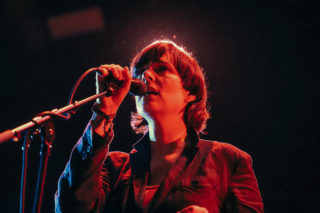 Equally, the galloping urgency of ‘French Disko’, with it’s war-cry chorus of “la resistance!” prompts righteous crowd participation, and ‘Miss Modular’’s retrofuturist wooshes feel perfectly at home in today’s post-everything environment. The lean self-discipline of ‘Metronomic Underground’, too, entirely controlled even during a startlingly noisy guitar wig-out section, is a textbook demonstration of a band trusting their own sense of industry and collaboration rather than relying on individual virtuosity.

They close with a fairly undeniable trio of ‘Percolator’, rattling away with itself but remaining taut and streamlined, ‘John Cage Bubblegum’, a perfect exercise in loud/quiet dynamic precision, and ‘Lo Boob Oscillator’, morphing from indie-pop chanson into a single-chord motorik behemoth across 10 entrancing minutes, during which one chord has surely never sounded so euphoric, the band breaking down and picking up again with evident glee, early nerves now forgotten. There’s no new material tonight, and no promises of any new records, but with this amount of energy, and their existing catalogue retaining such relevance and resonance, it’s a joy to have them back.