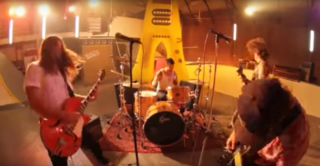 Fun fact: one in five songs on Spotify, according to Spotify themselves, has never been played in full. With a library of about 20 million tracks, that means there’s about 25 years of music sitting on a server somewhere that’s never been touched.

Un-Herd Music, our new playlist series, aims to address that, ten tracks at a time. Every two weeks we’ll compile a motley selection of songs with a zero in their playcount column, chosen for their genius or obscurity, their curiosity or just plain WTF-value.

This time round, we top and tail the playlist with two very different approaches to instrumental guitar music, and centre it around four tracks that take us round the world: vintage bhangra from northern India follows Muscovite hip-hop, then Argentine tango from the 1950s leads us, perhaps most bracingly, into Australian folk singing via a little history lesson.

Chuck in some long-forgotten 1930s feminist blues, some gorgeously meandering hard-bop jazz, a slice of jangly indie and – who else? – the Hell City Rockers performing ‘Hellrocker’ (pictured, above) from their only album, ‘Hell City Rockers’, and you’ve got yourself a playlist to illuminate the darkest of Spotify’s corners.

See you in a fortnight.