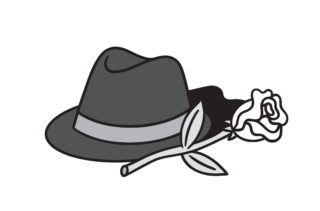 Words by Tristan Gatward Illustrations by Kate Prior

At the times I think I find pop fandoms most uncomfortable, I realise I’m probably going to name my first child Leonard Cohen. He once said that if your life is burning well then poetry is just the ash. But here I am, 24-years-old and about to board the Thursday morning flight to Dublin, having booked off my last remaining holiday from work for the sole purpose of celebrating what would have been his 85th birthday with some strangers that I met through his Facebook page. I wonder how Leonard Cohen would describe that ash.

He’s not the natural poster boy for a posthumous cult of any sort. The modern-day musician is meant to be a living and breathing canvas for your own self-projections; here’s the clothing line and that’s what they smell like. As for Leonard, when the world asked for another studio album, he quietly vanished to the Californian hills and became a monk. Middle-class literary students couldn’t renegotiate their social status by studying him as they could the down-and-out Beats; Leonard Cohen was as middle-class as they came. Sure, he wrote about alcohol, but he combed his hair and got on well with his mother. When he moved back to Montreal at the height of his fame and fortune, he avoided materialism with a vague embarrassment, insisting only upon owning a good wooden table in his kitchen. Furniture wasn’t – and has never been – the basis of a good brand partnership.

Despite dropping a poem-come-diss track from the grave last year shunning endorsement culture (“I am the Kanye West of Kanye West, the Kanye West of the great bogus shift of bullshit culture from one boutique to another”), one small step onto Irish ground is one giant leap into a who’s who of the Fedora trade. Jill is the first person I see, a 70-something-year-old powerhouse of a woman from Cornwall, who runs one of the more tentatively titled Facebook pages, called “I need a regular dose of Leonard Cohen” (or “regular dose” for short). The role of Facebook admin holds clout among friends. Hers is the task of coordinating 120 Cohenites from across the globe, at the envy of every non-retired CV. She’s just cracked a rib, dropping a 20kg suitcase full of Cohen memorabilia mid-flight from Newquay, but who needs medicine when you have the natural remedies of a fine hat and an Old Ideas European Tour t-shirt from 2013?

Thursday night in the Red Room of Dublin’s House Hotel a Sligo-based musician called Jerome performs covers of Cohen songs, joined by friends further down the whiskey line. A plumper, more Irish man called Paddy forgets the second verse of ‘Anthem’ while a buoyantly swaying crowd fills in the gaps like a dirge of ‘Happy Birthday’. It’s not all bath tubs and razor blades. In fact, most Cohen fans will rightly tell you it was never that at all. Listening to his music has always been a solitary pursuit, reimbursed by the fleeting experience of someone else laughing to the punchline that everyone thinks is about suicide. And maybe because no one you meet is ‘almost’ a Leonard Cohen fan, there’s some boundless joy in the way that two strangers here will greet each other.

From Montreal, there’s the self-named Sisters of Mercy contingent – three women reeling off one line after the other. Between Jerome’s songs, a Norwegian writer called Jorunn reads from pamphlets of poetry she’d penned in response to Leonard’s work, looking and sounding more like Cohen’s muse Marianne with each line. There are British expats who followed Leonard’s lead a retirement-age too late, resigned to spending their years on remote Greek islands without electricity. Even the guitarist of Just Mustard’s Dad is leaning against one of the pillars, surprised that I’ve heard of his son, or a place called Dundalk. There are other Irish musicians, jet-lagged American academics, an older, drunker man in a kilt who will tell anyone that listens that Leonard was actually a Scot in a suit, and not from Canada after all.

On the River Liffey the next morning, a tour guide assures us that we’re not the weirdest group he’d had on the boat this week, carefully dismantling the portside crucifix for a Philippino Catholics Day of Celebration. He’d had to keep turning the boat’s engine off for congregation leaders to say ten Hail Marys at a time. He only got a couple of Hallelujahs out of us. Watching 120 people in fedoras single-file back out from the riverbank and onto the terraced walkway, though, you’d question that. Whether it’s because Ireland is the only country to have a musical instrument as its national symbol, or that Leonard’s three-hour concert here for Live In Dublin has a significance for both the city and Leonard’s catalogue, or that the bridges bustling over the Liffey recall bastions of a great poetical export, our being here for Leonard Cohen isn’t really questioned.

On Saturday evening, we make our way to Dublin’s National Concert Hall for Between Your Love and Mine, a requiem by John MacKenna, reimagining some of Leonard’s final music and poetry. The stage is aptly sparse: a lectern draped in blue cloth depicting a Unified Heart, and next to it a big wooden table. Leonard’s own musicality was always underplayed (“people said that I only knew three chords when I knew five”), and there’s something church-like about hearing these songs played without the gravelly anti-melody that came from Leonard taking up cigarettes again aged 80. The violin and drum parts moved so deftly together that his strangely inclusive spirituality – being a Christian, a Buddhist and a Jew – became aligned (although maybe that was a result of the Red Needle, a cocktail he invented in 1975 of tequila, crushed ice and cranberry juice, that was in heavy supply back at the Hotel).

Wandering back, disorientated through the streets of Dublin, was the first chance I had to listen to ‘The Goal’, a new song from the collection Leonard was working on before his death, announced yesterday, to be released posthumously by his son in collaboration with the 37d03d collective. Where You Want It Darker was a perfect epitaph, the mordant sprawl of his voice on ‘The Goal’ seems to be a note from the afterlife. The most anointed lyric on somebody else’s tongue – “I’m almost alive, I’m almost at home” – feels so direct and wrapped in sincerity. Unlike a lot of the group I’ve just left, I never met Leonard Cohen, but right now, it feels like he’s reaching out of my headphones and telling me to stop feeling sad that he’s gone, to charge my phone and get some sleep.