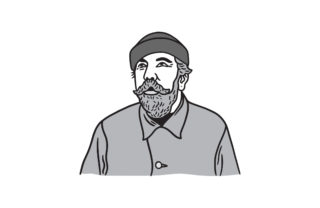 A label boss and friend's recollection of a musical innovator – "an educator, rather than pied piper"

Words by Nat Cramp Illustrations by Kate Prior

Andrew Weatherall changed people’s lives – for the better. Ever since the legendary DJ and producer’s death at the shockingly young age of 56 on 17th February there has been an endless stream of bittersweet stories and memories about how he did just that for so many.

Here’s how Andrew Weatherall changed my life. Not in the back room of Shoom, but in my living room in North Devon on Saturday, January 13, 1990 while watching The Chart Show on ITV. Happy Mondays’ Madchester Rave On EP was number one in the Indie Chart and, for some reason, they played the remix of ‘Hallelujah’ rather than the original. Something about it – the loping rhythm, the insistent Italo house piano, the weirdly ethereal atmosphere – struck me and, when I went to the local record shop, Sound’N’Vision, in Barnstaple later that day I bought the 12”. It was my first ‘indie’ record and, despite the fact that the little info box on The Chart Show only named Paul Oakenfold as the remixer, the sleeve also mentioned a mysterious and misspelt person called ‘Wetherall’. Over the next few months I bought Primal Scream’s ‘Loaded’ and ‘Come Together’, the remix 12” of My Bloody Valentine’s ‘Soon’, the Mix Of Two Halves of Saint Etienne’s ‘Only Love Can Break Your Heart’ and Bocca Juniors’ ‘Raise’, and I was more than aware that Weatherall’s name on a record – however it was spelt – was a stamp of authority and a badge of cool.

Every obituary has focused on his production work on Screamadelica, and it’s impossible to underestimate that record’s importance – it was the gateway drug to so much music, all of which has shaped my life since. It came out September 23, 1991, which was my first day at university (I rushed to Volume Records in Sunderland to buy it), but it gave me more of an education than three years of Communication Studies ever did. Even the names of his remixes (the American Spring mix of ‘Higher Than The Sun’, the Nancy And Lee mix of One Dove’s ‘Fallen’) were like little revision notes.

This was to remain his role – educator, rather than pied piper. He turned down adverts and remixing U2 and chose to remain on the outside looking in. He was one of those all too rare people who valued what truly matters, hence his refusal to – in his own words – “climb the greasy pole” and embrace the easy life he could so easily have had. But, despite his healthy cynicism, he was never jaded. He never lost that desire for discovery because he was a music fan, happy to share and eager to learn. His taste was impeccable and his knowledge was incredible – stretching way beyond music to literature, culture, history and fashion.

Because of this, he remained relevant right to the end, via the Sabres Of Paradise and Two Lone Swordsmen to The Asphodells, and under his own name, with the dark and dubby ‘Unknown Plunderer’ appearing just days before he died.  Then there was the production work with the likes of Fuck Buttons and The Twilight Sad, endless remixes, his NTS Radio show, the annual Convenanza Festival in France and so much more. Three whole decades of not following a single career path actually led to an entire atlas of wonder. The sheer variety of the songs people were sharing in the aftermath of the news was testament to his magpie spirit as well as his genius.

Andrew Weatherall had already changed my life when I met him in person at my first Sonic Cathedral night in 2004. I was in awe and a little bit frightened of him, but he was funny and friendly and even gave me his phone number offering his services for DJing duties. He kept that promise, not once but on numerous occasions and never asked for any money; I only ever paid him in brandy (no ice) and Coke (with ice). He also helped me achieve one of my ambitions when I released a 12” single with a Weatherall remix on it. In fact, he did two remixes of The Early Years’ ‘Hall Of Mirrors’ for the price of one (£0) as an apology after having to pull out of a DJ slot at the last minute.

Just a few weeks ago, we spoke about him working his magic on a song from the debut album by bdrmm. I told him that, in his hands, this song could make me feel like the person I was when I first bought that Happy Mondays 12” all those years ago. “It is with a heavy heart that I have to inform you that I am unable to help you with the desire to feel 18 again,” he replied, “as I’m not doing any remixes for the foreseeable future.” Oh, little did we know.

But in so many ways he will live on. A group of super-fans have made a Google Drive full of his DJ mixes from 1988 to 2020 – over 900 hours’ worth – called the Weatherdrive; his influence over the music and culture of the last 30 years is indelible; hell, he’s even on Google Maps walking up Kingsland Road. More importantly, if people could just learn from his approach and be more like him, then Andrew Weatherall will keep on changing people’s lives – forever.