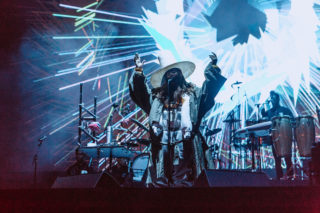 A legend in command

On the one hand, booking someone like Erykah Badu to headline a festival like Primavera is a no-brainer. After all, here’s a performer with 22 years of tunes to draw from and the sort of superstar no-fucks-given charisma that only comes from two decades of performing to huge audiences, so the idea of 90 minutes of smoky soul overlooking the Med at midnight is fairly hard to resist. On the other, though, Badu’s track record of missing stage times by the sort of margins that Primavera’s compact scheduling can’t accommodate, combined with a penchant for impulsivity that can result in long swathes of self-indulgent noodling at the expense of anything resembling a song, regardless of audience feedback, means her appearance is not without risk: essentially, despite her star-power pull, it’s hard to predict which Badu is going to show up – and when.

Tonight, thankfully, Primavera is treated to a masterclass in control, musically, vocally and, most crucially, in terms of delivery: from the moment Badu slinks onstage, slow and imperious and with a thousand-yard stare of pure determination, wearing the latest in her line of extraordinary hats (this one a sort of Elma Fudd-on-steroids number), it’s clear, rather magically, who’s in charge, and the display of authority and confidence is close to hypnotic: late on, she stops ‘Window Seat’ mid-song to suggest a specific lighting effect – the sort of antic that would normally derail the flow of any gig – but when the band pick back up again, exactly on Badu’s command, the sheer liveness of it all is glorious. Elsewhere, a hard-knocking new jack swing middle section, with ‘On & On’ sandwiched into a whipsmart three-song medley, features Badu invoking James Brown’s old trick of conducting her musicians with furtive, lightning-quick hand gestures, oozing power and cool as she flicks her wrists in different directions like a master puppeteer. Set closers ‘Liberation’ and ‘Other Side of the Game’, too, groove effortlessly, the eight musicians on stage now moving as a single, languid creature with Badu its virtuosic, bittersweet-voiced head. 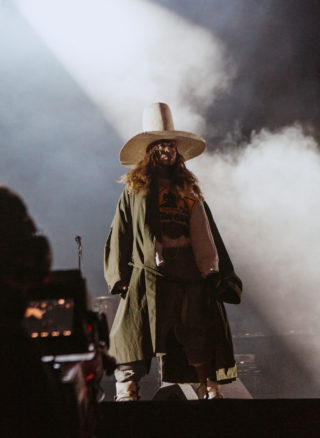 There are moments of the old indiscipline – she spends a couple of intersong lulls jabbing aimlessly at a drum machine like a toddler at a Fisher-Price play centre, and others rambling about chakras and spirit – but even at her most hippie, asking the crowd to salute Jupiter shining overhead or “exchanging energy” with her audience at the set’s climax, she gets away with it because of the calm command that she exudes.

“I’m the envy of women and rule the men, bitch”, she sings during ‘..& On’, adding plosive staccato to the final word to much whooping from a crowd who, by now, Badu seems to have wrapped around her little finger. Across an hour and a half on a balmy Mediterranean evening, never a truer word was sung. 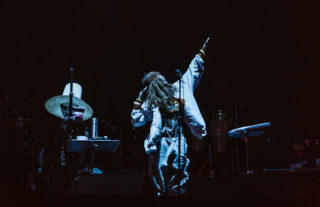