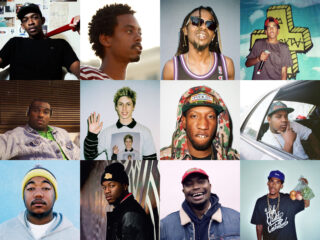 A decade on from the rap collective’s debut album and subsequent implosion, Skye Butchard logs what happened next for Odd Future beyond those who became superstars

If you were in secondary school in 2012 and wore a bucket hat all year round, there’s a good chance you know every verse on Odd Future’s ‘Oldie’. The ten-minute posse cut and its accompanying video underlined everything that was special about the L.A. rap collective at their peak. Released a decade ago on the group’s only major label record, The OF Tape Volume 2, it’s a rare moment that still stands up to scrutiny. Its members will likely say the same.

In many ways, you had to be there. Much of Odd Future’s material was juvenile and petulant. They rapped about rape and the Columbine shootings, used slurs like they were collecting them, and made early horrorcore look sophisticated.

They were also incredibly talented, and spoke directly to a young audience without condescension – something record execs still can’t do. Their ascension was fuelled by shock tactics, gobbled up by an over-eager music press and a rabid fanbase. But there’s no doubt their DIY approach earned much of the hype. It still gives me chills watching Earl Sweatshirt, Frank Ocean, Tyler, the Creator and Syd Tha Kyd revel in their success on ‘Oldie’, lip-syncing their verses at a chaotic XXL photoshoot while photographers look baffled.

Its biggest members outgrew OF by 2016, moving on to more timeless and impactful material. Tyler’s exploration of raw, conceptual R&B has made him a superstar. Frank is as elusive and singular as ever. Earl is the poet laureate of a heady experimental rap movement having its own moment. Syd and the rest of The Internet are keeping the groove flowing.

But you know about all those guys. What about the members that aren’t headlining festivals? Who was the white guy on that album cover? Here’s the odd future of Odd Future.

When Odd Future splintered in a thousand directions, so did Left Brain. As part of MellowHype with Hodgy, he embodied the edgy and aggro attitude that was part of Odd Future’s larger strategy of drumming up as much commotion as possible. Ironically, it was later that he mellowed, producing more layered and mature music for a host of names in the indie rap scene. Just this year, he formed a partnership with fellow L.A. artist Sahtyre. Single ‘Bat Outta Hell’ is one of his strongest songs in years, entering a woozy, depressive and reflective mood that suits him well.

This founding member of Odd Future was releasing music even before the collective took off, with his 2007 mixtape released at the age of fourteen. That feels like a lifetime ago for all of us, but certainly for Casey, who’s been at war with record label Epic since the release of his 2015 debut album Live & Grow. Epic wanted hits but weren’t exactly helping him get there. His is a cautionary tale of the way labels can trap young artists in restrictive contracts while they’re still growing. Now releasing independently, with projects like 2019’s Organic, he’s finally making the music he wanted to make.

When Tyler, the Creator jumped on Jimmy Fallon’s back ten years ago on Late Night, Hodgy was right there beside him. A few years later, the two had a public falling-out at Camp Flog Gnaw, Tyler’s music festival. Hodgy was upset about Tyler’s perceived abandonment of those who helped him start the collective. He bad-mouthed him on stage. Though they eventually patched it up, this public feud foreshadowed the frayed nature of a group that began to outgrow itself in the same way most school friends do. Later, he split up with MellowHype, and he’s been out on his own ever since.

Hodgy never found a signature sound like the group’s heavy-hitters. His latest EP, Everyday People Change Into Someone is awkwardly caught between melodic R&B and the bad punchlines of his youth. He sings: “Everyday I’m on my grind like a skateboarder” far too sincerely. He’s still using the word ‘retard’. You remember why you didn’t keep up with everyone you liked as a teenager.

“Hey it’s Jasper, not even a rapper… got a TV show so I guess I’m an actor”. Those cheeky opening lines from Jasper’s verse on ‘Oldie’ are exactly what made OF’s punk-rap ethos exciting. He was mostly goofing around. He and his friends made Adult Swim comedy shows, hypebeast clothing, and weed strains, and had skinny white kids and CEOs alike in the palm of their hand.

To this day, he’s still having a blast on the stoner TV circuit, fittingly starring in Jackass Forever, a clear career highlight for a teen who once dreamed of making a show called ‘Blackass’.

When Domo Genesis featured on Tyler’s Call Me If You Get Lost last year, an alternate reality was opened. It was one where Odd Future stuck together and sharpened their original sound as close collaborators. The results were impeccable. With the new skills and perspectives they picked up with time, Tyler and Domo did their throwback justice.

It also highlighted just how entertaining and consistent Domo Genesis is. I’m sure plenty of fans went back to check out his recent material after listening. Though never selling out arenas or cultivating a ravenous fanbase of his own, Domo Genesis is always reliable for a good feature.

Joining in the second wave of Odd Future sign-ups, Mike G’s time with the collective leant more on the professional side than the ‘hanging out with my friends’ side. He released music before the group, and plenty more music afterwards. These days, you can find him making Chopped and Screwed remixes as part of The Chopstars collective, battle-rapping in old-school leagues, and releasing steady solo material of his own. Still, his ‘Mike G.S.I.’ sketch as part of the Loiter Squad – a gloriously awkward CSI parody – more than justifies his time with OF.

When Odd Future was having its moment, circumstance meant that Vritra was left behind. He was evicted from his L.A. apartment around the time that contracts were being signed, and his move back to Atlanta left him outside conversations that solidified the core members. His success has been forged out of years of graft on his own independent projects while working as a forklift driver by day. After a handful of projects, and a signing with independent label Stones Throw, he’s carved a space for himself. He’s a prolific and dependable musician who perhaps didn’t get his dues at the time.

A weird one. Though collaborating with several Odd Future members, and featuring on the original version of Tyler’s Bastard, there are some in the crew who’ve claimed that DeShay was never an official member. Their Twitter even stated “OF does not fuck with Brandun DeShay” in 2010. For fans, his contributions stand more as an example of the volatile and combative nature of the collective. It seemed that if it was 2010, you were from L.A. and you wore a pink doughnut t-shirt, you could brag about connections to the group.

You might know Lionel Boyce (aka L-Boy) as the guy roasting each member at the start of The OF Tape Vol 2, but he had more behind-the-scenes influence than many realise. He was involved in the group’s oddball TV ventures, including co-creating the group’s surprisingly decent animated sitcom The Jellies, which ran for two seasons. He’s also due to star in the upcoming FX comedy The Bear, which has got that guy who played Lip from Shameless in it. It might be good?

Though not a household name, Matt Martians played a key role as band member in The Internet, alongside former OF alumni Syd, Patrick Paige II and Steve Lacy. His beat-driven solo work is worth highlighting, too. Take [Going Normal], a groovy collection of homemade loosies quietly dropped last year. Having worked with Vritra, Brandun DeShay and a host of other affiliated acts, it’s arguable that Matt Martians is the secret glue that holds many of Odd Future’s separate artistic impulses together.

Like the rest of the group, Travis ‘Taco’ Bennett has had an unusual and unexpected career since the death of Odd Future. Highlights include voice acting in GTA V and directing the group’s Adult Swim shows. More recently, he’s starring in Lil Dicky’s hit comedy Dave, and co-creating Hanging With Kuz, a series that follows LA Lakers star Kyle Kuzma as he gives fans a look at his life away from the court. “I really didn’t do anything,” he told Complex last year about his time in Odd Future. “I didn’t rap. I didn’t produce.” As he shakes off the ‘Taco’ part of his name, he’s doing a lot more.

Lucas Vercetti is the twinky white guy cheesing on the cover of The OF Tape Vol 2. He basically managed the merch stands, did some photography, and looked cute. Merchandising is an important job, but your merch guy normally isn’t in the group.

This strength-in-numbers mentality was of course part of what got Odd Future attention in the first place. If us journalists were gullible enough to take the bait, to the point that we’re still writing about Lucas Vercetti a decade later, then that’s on us. Apparently, there are rumours he’s now dating Bruce Willis’ daughter, so he’s probably doing alright.