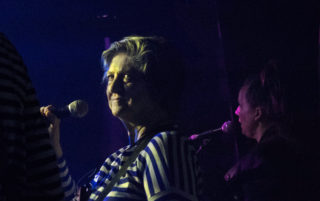 At the Soup Kitchen, the Raincoats deliver their feminist message with humour and wisdom

If you want the crowd to get warm in preparation for The Raincoats, adding some fire music from Duds is a sure-fire strategy. Duds’ snot-nosed post-punk draws from the bizarre end of the gene pool – the Factory parentage, perhaps. Playing with Dave McLean, a sax improviser and one of the most talented people in Manchester, is a bold move, but one that is rewarded. The screaming sax puts together the group’s pieces of wirey, abstract and disjointed sound in a way that I would not have previously imagined possible – it’s a wonderful feat.

I appreciated the adventurous choice in support because The Raincoats were such an anomaly in punk’s 1977 heyday. Maybe the blowhards in the punk police were distracted by the putative fusion of punk and reggae – that the band were piled into – to overlook the broader range of styles and genres that they embraced then and on this evening. This might account for their contemporary relevance, as the link between identity and music enjoyed is typically less determined as genre boundaries are, generally, eroded.

During their set, there are times when songs are stretched, the lyrics focused further inwards and the sounds resembling those found in free-er musical forms, like on ‘No One’s Little Girl,’ for instance.

The Raincoats’ approach to music-making was always complimented by their message and, frankly, their continued existence in a music industry that is unfriendly towards women and, particularly, older women. Tonight they showed that remain free thinkers, righteous and full of integrity. They draw honestly from experience, a role feminist women from their generation tend to take pride in fulfilling, but they do it with the humour and wisdom that you get from graduating from being a watchful but weird youth let loose in a city to a radical adult.

This is no better shown than when they play ‘Fairytale in the Supermarket’ and ‘No Side to Fall In.’ The classics from their first album are sardonic, true to life and perceptive. Both are put together in a way that shows their appreciation of the relationship between noises and rhythms that others would be scared to even try.