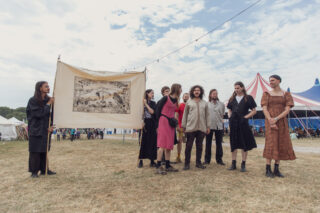 The sun beats down on day one proper of this year’s End of the Road, following the busiest Thursday night of the festival’s history, almost everyone turning up for the competing headline sets of Khruangbin and Pigs Pigs Pigs Pigs Pigs Pigs Pigs. But the new morning has an unaffected calmness to it: families lie under the shade of one umbrella hat, looking like a starfish from above, heads together, the occasional shade of a passing bird only allowing some temporary cool. A muster of peacocks squawk at anyone walking above a brisque pace. A young boy swirls a Majorette baton, proudly sporting the same Pigs shirt from the night before. It’s a panoramic scene you’d imagine gliding over in the most softly nostalgic dream. The grass isn’t even dead; it’s a beautiful yellow poking through protective hay. 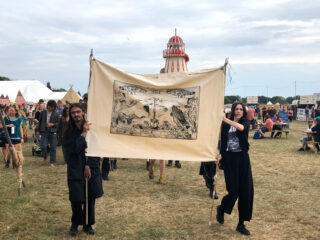 All of this is helped, of course, by the Shovel Dance Collective in procession across the fields, slowly walking from the Tipi tent’s fire pit to the main stage, leading their wilful followers and anyone nearby with all but a panpipe, a hand-drum and a horn worn as a necklace. They stop occasionally to face the legions behind them for a few minutes of song and auld fashioned harmony, an awkward group of Pied Pipers battling the sound clash of Automotion from the Big Top tent and Wings from the Cider Bus, in front of a fabric scroll. A baby joins in with a crying chorus of “I’m bound to leave you Nancy.” One by one, they make it up to the main stage and sit on chairs in a horseshoe, elevated but distinctly in the round.

“We play traditional folk music,” they proclaim, “and this is the music of the working class. This next song shows us how working people will always get shafted by the ruling class.” They add sheepishly, “particularly officers on boats,” aware that they have to remain at least a little true to the tradition beyond the invocations of Lynch and Dempsey, whose thoughts from the real world outside briefly reach us. This is overtly political, of course; London’s folk revival – in which Shovel Dance Collective will doubtless be talked about as an integral part of in future years – is opening folk music’s doors to the possibility of another storyteller. 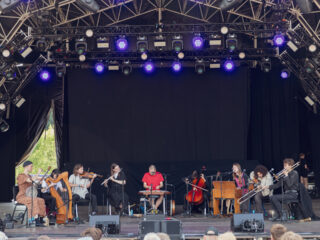 They grin between each other as a bee circles singer Mataio Austin Dean’s head mid-song, while voices sweep with an earthy gravitas through set highlight ‘The Merry Golden Tree’, a murmuration of strings and whistles whistling as if through a portal from a time before. The collective adds words to instrumentals, ‘Newcastle’ and ‘Portsmouth’, taking respectively from Shirley Collins and Frederick Fennimore (sic)’s writing, while a banjo’s played by bow and a beautifully picked harp comes to the fore in Aberdeenshire tales of ‘Wiping Card’.

“This is the wildest stage we’ve ever played,” they say, stopping to take breath, before adding, impassioned, that “this is folk music: this is our music, this is your music, this is everyone’s music.” It’s old music and it’s new music and it’s both and it’s neither, but folk is all around us. Christening the new Boat Stage a short walk away is Aga Ujma singing refracted folk songs of her heritage through Poland and Indonesia. John Francis Flynn will play traditional Irish folk songs in the same space later, while James Yorkston is a late headline substitute at Talking Heads. It’s a sublimely poignant start to the weekend, either way.