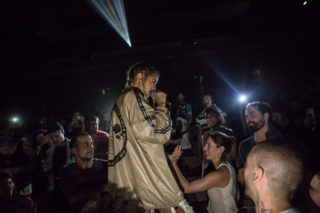 On the hottest day of the year, some of us sat in the dark feeling confused

Tommy Genesis can’t rap. That’s what people tend to post online, along with barbs about her flow in general. Listening to the YouTube tracks above such disses (which often resemble the early work of M.I.A., whose Meltdown Festival Tommy is part of this evening), they seem not totally unfair, but harsh, for sure. Tonight, TG hands her own head to her detractors. In fact, she’s worse than that. At one point the sound guy heckles her. The sound guy!

Things start with the Canadian rapper asking for all the lights to be turned off. All of them. Ok, that’s kind of cool, as she hops off the stage and starts rapping in the aisles of the all-seated Royal Festival Hall, standing on the empty chairs, illuminated only by phone cameras. It’s not any easy space to motivate and Tommy is getting stuck in.

Sixty seconds in, it’s instantly clear how buffed those YouTube tracks are – for anyone who’s not feeling Tommy’s laidback, melodic flow there, her precocious squeals and screams that often leave her out of breath and gasping for air down the mic are a lot harder to sit through. A song like the mellow and dark ‘Angelina’ (played second) is unrecognisable as Tommy turns the end of every other line into a yelp. Still, she’s in the crowd and vaulting chairs and whipping her four corner pigtails (kinda like Korn), so there’s something to it for now. And all the lights are off, including the ‘visuals’ now (a still of some leaves), at the insistence of Tommy, even though some people have started shouting turn the lights on. 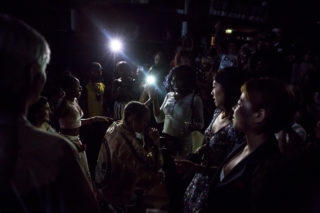 The rapping truly is terrible, although clearly not in Tommy’s eyes, who insists on going at it acapella twice, which really shows up her flaws. “Is there reverb on my mic,” she calls to the sound desk. “Please take that off.” The sound guy shouts that there’s no reverb, although it could definitely do with some.

All of this isn’t helped by the fact that Tommy’s trap beats are being triggered from the wings of a stage she’s not using, and particularly by the fact that she calls for the next one by cutting almost every song short (“ok, kill that one”) and then saying, “next track, please.” There’s a difference between wanting your hip-hop anarchic and completely not-arsed, and considering Tommy Genesis doesn’t even care enough to finish songs or hype the next in any way, a lot of people are starting to question why they aren’t sat outside in the sunshine. And soon enough, why shouldn’t people call out from the back of the room?

It doesn’t feel like Tommy’s lack of professionalism is a conscious tick either. It’s not her way of challenging the conventions of hip-hop or performance; more a lack of experience mixed with delusion.

What starts as fun if a little inept quickly becomes annoying for a vast majority of the crowd, and then straight up embarrassing. Towards the end of the set, when Tommy is at the back of the hall, a guy on his phone doesn’t even realise that she’s stood right in front of him. “What’s that about?” she asks, on mic. He can’t even be bothered to lie. “I’m on Snapchat,” he says. 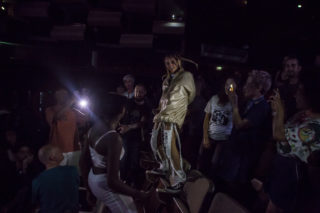 In the beginning, when Tommy ran up a row of seats, people contracted towards her; by the end, everyone has travelled beyond excitement, past disbelief and to complete apathy, which is quite an achievement considering we’re all sat in blackness with all that bass going on. It’s how you’d deal with a precocious child at a barbecue – silence yourself to the noise and hope they stop stamping their feet. To that end, as people are less interested, Tommy craves their attention even more. Initially, people rushed to help her down from the Festival Hall hoardings; before long she has to wait for someone to pull themselves out of their chair to lend a hand.

That stubbornness is the one thing that is kinda cool here – she doesn’t drop her act from beginning to end; she never surrenders, even when she’s so clearly lost the room. She’s not a dick, either. She’s polite on the mic, even when coming back to the sound guy again on if there’s reverb on her mic (there really isn’t); even when restarting tracks; even when suddenly deciding that it’s too dark and she needs some lights on for her final track; even when, at one extra weird moment, she commentates on what she likes about that bit of the song (the instrumental middle section of ‘Hair Like Water’, which usually features Abra).

There is still a portion of the room that go with her throughout – like the way parents think their own kids are adorable even when they’re screaming their heads off with food all over their faces. Everyone else would be exchanging glares if they could see each other.

“This is post rap,” says Tommy at one sour point. Yeah… I’m out.