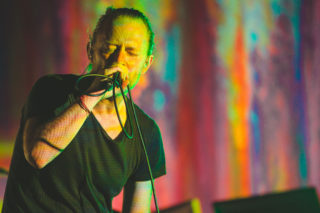 Certainly live it's something entirely different

“I’m going to do this song by the band that I’m in, Radiohead.”

Thom Yorke returns to the stage of Manchester’s Palace Theatre by rapturously-expressed popular demand. This is his second of two encores and the first point at which he’s nodded towards his day job. He plays ‘Spectre’, the Bond theme that he and his bandmates were asked to compose for the film of the same name a few years ago; it was inexplicably passed over in favour of that baffling Sam Smith track that didn’t appear to have anything to do with international espionage.

It sounds facetious, the way he talks about the group he fronts as if nobody knows who he is, but in fairness, nobody here has turned up expecting ‘Thom Yorke plays the hits of Radiohead’. They all know full well that there’s no such thing as ‘Radiohead play the hits of Radiohead’. They played in the city around this time last year, across town at Old Trafford cricket ground after the enforced closure of the arena, and most of the 2000-strong crowd tonight were doubtless there. This is a very different affair, though. 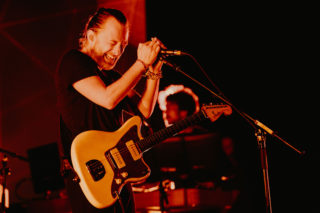 What tonight’s show does is put to rest the idea that Yorke’s solo career is some awkward distraction from Radiohead. It is another thing entirely and an entity in its own right. The closest the two got to overlapping was ‘The King of Limbs’ back in 2011, but there’s no acknowledgment of that tonight; instead, we get choice cuts from both ‘Tomorrow’s Modern Boxes’ and his debut under his own moniker, ‘The Eraser’. He’s backed by a bass player and a jack-of-all-trades Nigel Godrich who flits between two formidable-looking synth rigs; Yorke gets involved himself intermittently, but for the most part is front-and-centre, instrumentless, less singing than yowling as he jerks back and forth, the ‘Lotus Flower’ video come to life.

He litters the set with unreleased material too, and you wonder whether it’s better that way; is he going to be able to make the likes of ‘Not the News’ and ‘I Am a Very Rude Person’ sound as enormous as this on record? The set waxes and wanes with the same sort of seamlessness as a DJ set might, with swirling visuals on LED screens providing the visual backdrop, and songs like ‘Black Swan’ and ‘The Clock’, from his first LP, sound as if they were conceived alongside his more recent work, rather than years before.

You leave convinced that he could have reinvented a few older Radiohead tracks the same way; he has a weird mastery of his own work that makes it pliable, and allows him to bend it to his will. Few musicians could sell out a theatre to play a show that feels like live impressionism in action, but Yorke – clearly – is one of them. 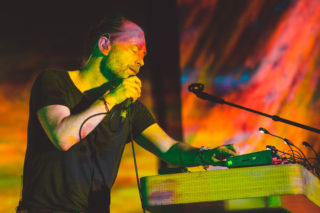 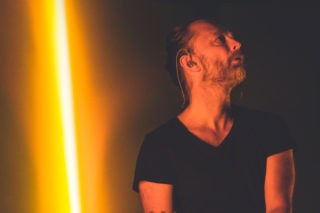