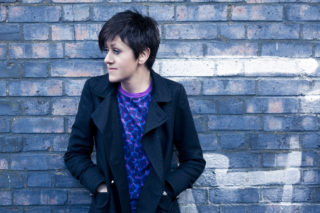 First a member of early 80s post-punk band Marine Girls, and then one half of Everything But The Girl, Tracey Thorn’s latest solo project is a soundtrack for Carol Morley’s debut feature film The Falling, in cinemas April 24. From her London home, she filled in our Getting To Know You questionnaire

Don’t be a big shot, take a jacket.

I’ve been too lucky; apart from teenage Saturday jobs all I’ve done is singing and writing.

Favourite place in the world and why?

‘The Folks Who Live On The Hill’ by Peggy Lee (this week).

Maisie Williams, at the premiere of The Falling. She was tiny and adorable.

I’ve never been on a bad date.

Getting all of a roast dinner on the table at the same time.

All my dresses (I have many).

Anyone who is pointlessly cruel and rude for a living. There seem to be several.

The usual – kids being ill or in an accident.

Achieving what you set out to, or coming somewhere close.

I’d love to be able to ice skate.

I wish I hadn’t plucked my eyebrows to near-extinction.

Yes you will, don’t worry.

Be kind to yourself.